Preparing My Own Spices


I wandered downstairs to check the fridge today and saw I had nothing stocked except mushrooms, tomatoes, fresh chillies, butter and a bottle of milk. The spice cupboard was almost full though, so this was enough for me to attempt a curry.

I'm pretty sure mom doesn't use any pastes for her vegetable curries. I really wanted to make my own pastes though, so I just went ahead and did whatever I wanted for this dish.

But before I go on, I should mention two things I've never done in the four years I've been cooking:

Number 1 is because I usually stuff my meat dishes with vegetables and supplement with salads and fruits, and number 2 is because, well I'm lazy and buy my pastes! But I decided to change both these facts about myself and today's post is about the things I learned while doing so.

Making My Own Pastes
I started by making garlic and ginger pastes. I don't have the proper utensils or appliances you'd need for this though, so I improvised a bit. I chopped up the ginger into a mince, added a teaspoon of water and hammered/pressed/squished as best as I could using a metal soup ladle, turning the mince into the best possible imitation of a paste. I repeated the process for the garlic, and you can see the results in the picture below. The ginger was a little too fibrous, and both pastes still had bits in them. They didn't turn out exactly as you'd want, but were passable.

Toasting Cumin Seeds
I heated up a frying pan with some oil and toasted a few cumin seeds, mostly because I remember mom using them in her vegetable curries. I left the seeds on the stove for 3 or 4 minutes, then put them on the chopping board and ground them down using the soup ladle. I think I toasted them a little too long, because they a little burnt after I ground them. So perhaps a shorter toasting time would be a good idea. I also remember my mom telling me that cumin seeds don't necessarily need to be toasted with oil.


Cooking My Spices Properly
I then chopped up half a large onion and fried it with a few cloves, cardamoms and black pepper on high heat till the onion turned translucent to brown. I then added a little boiling water, followed by the pastes, salt, powdered turmeric, chilli and a pinch of paprika. I mixed everything together, and stirred the mixture continuously and cooked it over the next 20 minutes, adding boiling water now and again so that it wouldn't dry up.

Now here's the thing - in some of the recipes I've uploaded, I mention cooking the spices till they release a "distinct fragrance", like here. This is just one of the ways to prepare spices for a curry, as you can also put all of your ingredients into a pot and let them cook like in the recipe here. I usually follow a method between the two, where I cook the spices for a bit, get impatient, dump all my ingredients in and leave. This was my first attempt at going through with the first method properly, and I did a pretty poor job. I almost burnt the mixtures few times, and added waaay more water over the 20 minutes than I ever remember my mom adding. All in all, this tells me that the recipes I've set out before will be challenging to follow, as cooking the spices properly is harder than it seems when observing, or when reading instructions.


Adding The Vegetables
After cooking the spices for 20 minutes (they were barely done!), I decided to add 125 g of mushrooms followed by a bit of ground black pepper. I mixed the mushrooms and spice mixture together, and let them cook for 4 to 5 minutes. I did a salt check, and added a little more ground black pepper, 3 chopped up tomatoes and 2 fresh chillies. I mixed everything again, and let the curry cook for another 10 minutes before taking it off the heat. I let it cool just a little before serving it with boiled rice. 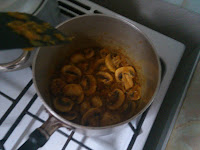 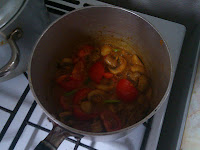 On the left, just the mushrooms. On the right, tomatoes and chillies added

Conclusion
Main thing I've learnt - I've got to practice cooking my spices properly, and get them to thicken into the fragrant sauce I've seen my mom make for all of my favourite dishes. Also, I should probably ask my mom for a real vegetable curry recipe, because what I made was edible...but not something I'd like to advertise I made!