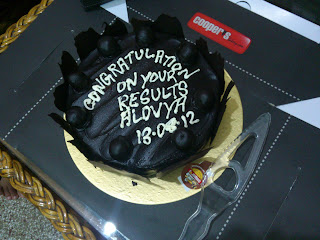 The quest for good cake in Bangladesh

I first discovered Cooper's when I came back to Bangladesh for college in the mid 2000s. Good cakes of the round, celebratory kind are hard to come by in Dhaka, so I went in feeling skeptical. I walked out with a small chocolate cake that I remember being impressed with. I went back a few times after that for their pasties, snacks, etc. and I remember the place fondly.  Fast forward to 2012, and I was back in Dhaka and Coopers was still around. Recalling my previous positive experiences, I went in to get a cake for my little brother. Unfortunately, it seems like everything has gone downhill since I was last here.

Let me start at the beginning. Despite them not being a sit-and-eat kind of place, Cooper's have always tried with their décor. See, they've even plonked an old green mini in the middle of their shop. People usually come in to buy cakes or food to take away, and in my opinion the few tables and stools they have are perfectly adequate.  Food is on display in what I hope are refrigerated counters, given Bangladesh's tropical climate. The presentation is fine, but there's no attempt at anything snazzy. 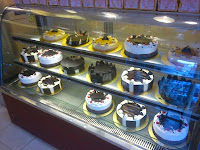 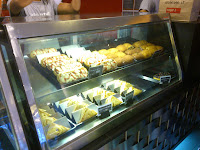 The service was good - the staff were nice and helpful from beginning to end as we chose our food, got it packed and paid. Given that it was Ramadan, there weren't a whole lot of savoury snacks on display, and we went for the French pizza bread, zesty chicken and chicken tikka roll (i.e. top right picture above). The French pizza bread was a halved mini baguette with beef mince, tomato, tomato sauce and cheese; tasting like the usual Bangladeshi take on pizza. The zesty chicken was basically a chicken pasty with too much pasty and too little chicken, and no zest whatsoever (not to mention too much salt!). The chicken tikka roll was, well, a chicken tikka roll. As far as the prices go - other shops charge similarly for pasties and rolls so I can’t criticise. I haven't seen the price for a mini pizza since coming back to Bangladesh, but I still can't justify the TK 120 + that I paid for that thing. All in all, all of the snacks were mediocre at best, and failed to reach the standards I remembered Coopers for.

The cake wasn't any better. We got a dark chocolate cake called the Tia Maria, but there was nothing dark about it when sliced through. The sponge was dry and had obviously been baked with as little cocoa and chocolate as possible. The chocolate shavings on the side of the cake were of the cheap, greasy variety. The icing was a tad better, but maybe that was just the texture masking the greasiness. Surprisingly, the little chocolate covered balls you see on top of the cake were very good. Moist, and most importantly, thoroughly chocolatey: if the whole cake had tasted like those little balls it would have been perfect. But I imagine this isn’t the case because Coopers want to keep costs down and thus are stingy with their ingredients. Yet I paid about TK 1000 for this cake, and I know other shops do similarly awful cakes for half the price.  Go elsewhere, for better value and/or for better cakes.

Folks have reminded me that stores expend less effort on their usual non-Iftaari fare during Ramadan, and have suggested that things at Coopers could get better later in the month.  While this may be true, it really doesn't excuse the drop in quality from what I remember. And it certainly doesn't excuse the awful and rather expensive Tia Maria cake. Coopers has left me greatly disappointed. Its Bailey Road branch was one of the cake places within easy reach of my grandma's house in Old Dhaka but now, I guess I'll have to go elsewhere.