Hunting Down the Original

I'm not sure who introduced me to Star Kebab, but I'm willing to bet it was someone on my mom's side of the family - that's where all the original foodies in my life come from. Star in Dhaka takes on various incarnations - there's Star Kebab in Panthopoth, two Star Kebabs and a Star Restaurant in Dhanmondi, as well a few Star Bakeries dotted around town. This list is by no means exhaustive, and then of course there's Hotel Star in the Thatari Bazar area of Old Dhaka, the place where it all started. It's a fifteen minute rickshaw ride from my grandma's but I'd never visited as Panthopoth used be on the way home from college, and that's where I'd stop to get kebab for the family. 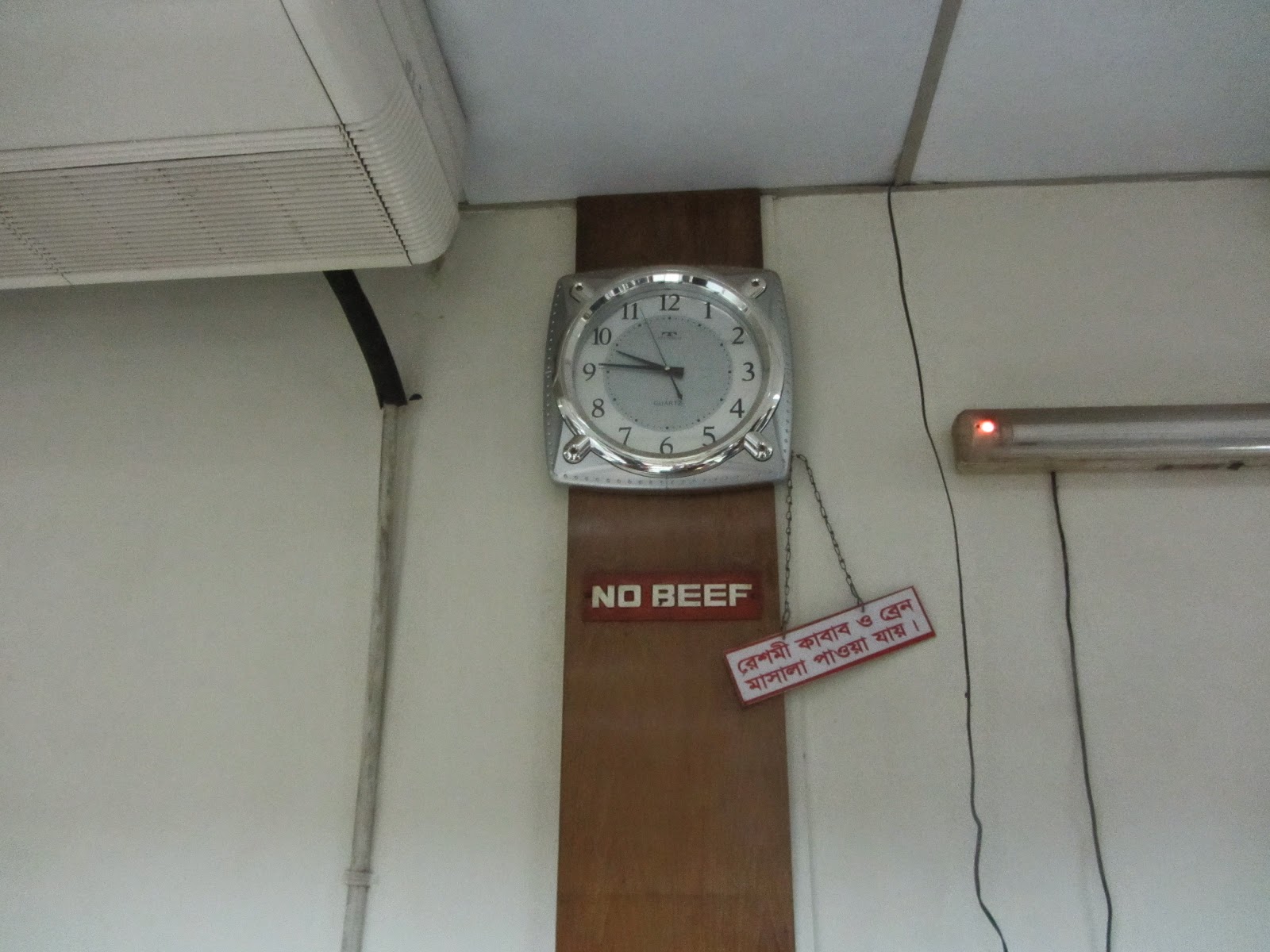 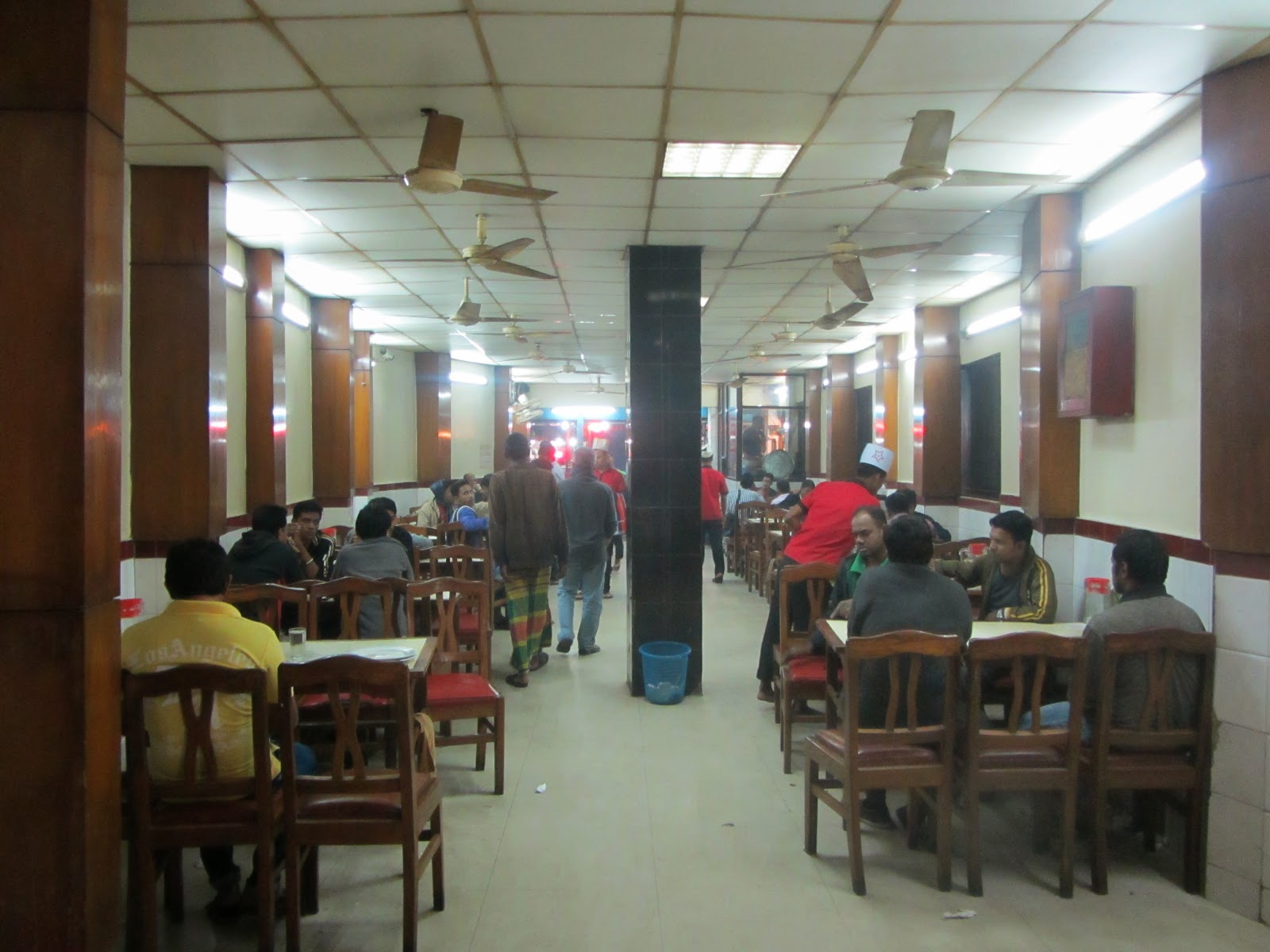 On the left, a "NO BEEF" sign. Thatari Bazar is historically a Hindu area.
On the right, the interior.

The Thatari Bazar Star doesn't actually carry one the classics Star is famous for - the beef sheekh kebab - as the area is historically Hindu. In fact, the Star menus vary quite a lot from branch to branch, depending on whether its branded with Kebab, Restaurant, Bakery etc., and also depending on how quickly the food runs out (and it does!). We were vaguely aware of this as we wandered in and showed ourselves to a table, and a few waiters came over to give us menus and ask if we wanted some water.

We had arrived for dinner around 9 PM, but they informed us that almost everything on the menu was already finished. This was unusual - peak Bangladeshi dinner time starts around 9 PM, and I imagine the political unrest in town was the root cause of people's unusually early forays into town. The menu above is in Bengali, but I believe the reverse was in English. Prices fell within TK 140 to TK 180 for a full meat plate or kebab, and biriyanis ran from TK 220 to 245. This makes Star just a little bit cheaper than usual, as comparable outlets (Fakruddin, Hajir Biriyani) charge a bit more. Almost all items can be bought for half portions, and a full meal can easily be had here within TK 300.

We opted for whatever was available, and even that made a great meal. Needing something gravy based to go with our massive chapatis, we ordered two bowls of lamb chaap (if you're wondering what that is, see my recipe here) and one bowl of chicken jhalfrezi. The chaap was great - hot and spicy, with a fine balance of flavours unlike anything I've ever managed at home, albeit a little bonier than ideal. The opinion around the table was that the jhalfrezi was even better, a rare occurrence in our family where we love our red meat.

The biriyani arrived shortly after, and was the only let down of the meal. The plate we were served had plenty of meat, but it was a little dry and the dish a little bland. Not as bad as Hajir Biriyani - an old famous name that now runs on reputation rather than substance - but nowhere near as good as Fakruddin, which remains one of best places for biriyani despite inflated prices.

I personally had to try the brain "massalam" which set my mouth on fire despite its tangy, tomato flavour. The flavour is worth mentioning, as many restaurants that have brain on the menu do not get it right, serving the dish undercooked with a lingering raw smell. The dish at Star, however, was the best preparation of brain I've ever had - creamy and non-membraneous - a texture my cousins insisted was the result of adding egg to the list of ingredients. I suppose this adulterates the dish slightly, but the end result was worth it. I had to insist on getting another lassi though, to calm my body down. The boti kebab was similarly excellent, and I'd expected nothing less from Star. My only complaint would be that it was again a little bony - which often happens with boti kebab and is why I usually opt for the beef sheekh at other branches. The beef sheekh is always pure meat, minced, spiced and reassembled on a skewer to be grilled (see here). At Star, when served warm to order, it melts in your mouth and is incomparable to attempted recreations I've had elsewhere, such as Lasan in the UK.

After all the spice and heat, we needed something calm the fire in our bellies. We all opted for the falooda, or were rather forced to as it was the only dessert on the menu. Falooda is a very popular dessert in Bangladesh, akin to halo halo from the Philippines. It's hard to describe in an appealing manner - imagine noodles, fruit, tapioca pearls, ice cream, nuts, raisins and jelly suspended in thickened milk. I believe the drink/dessert has its origins in Persia, morphing and changing due to its journey through South Asia. In Star, the milk was substituted for custard, and the only fruit used was banana. A win for me, as banana custard is a childhood favourite of mine. The faloodas we were served were obviously freshly made, making for a great end to one of my best meals in Bangladesh during this trip.

The service we received during our meal was very good - our waiter jovially put up with our many demands, which was especially impressive considering we were a large party with complicated orders. My only words of warning would be to go early to not miss out on a large portion of the menu, and to avoid a  driving  a car in to Thatari Bazar because of the narrow streets. If you're going to another branch, check what food is served there, or at least make sure it's a Star Kebab or Star Restaurant, rather than a Star Bakery. I cannot recommend the franchise enough, and to me it stands out as one of those establishments that will always be considered too "rough" to earn awards or accolades, but easily outshines many other restaurants that do so in terms of food.
Food: 8/10
Service: 8/10
Atmosphere: 7/10
Value: 7/10