The Lull After Graduation

The title is a lie.

Life is crazy right now, with having to sort out a new job and what not. I'm writing this post to see if it'll help me relax, in the same way cooking curry does. There's something about combining all the spices in a pot, blending and experimenting with ingredients to produce the perfect flavour, that melts all my stress away. Often enough you'd find me in the kitchen at 1 AM after an intense study session, defrosting chicken and pulling spices from the cupboard, wondering what vegetables I could cram into this dish to get out a balanced meal.

This recipe is something that I figured out quite early during my university days, because lets be honest, adding tomatoes to curry doesn't take much imagination! Mom does a version of it too, and I'm describing her version below as it's a little more sophisticated (and tastes better!) than mine.


Note of caution though, turns out I didn't write down mom's suggested amounts for ingredients for this one, so what I've listed here are all approximate amounts. I'm running estimates off the frozen 500g of chicken breast I have in the freezer and how I'd cook it! 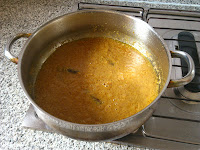 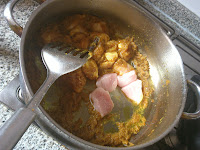 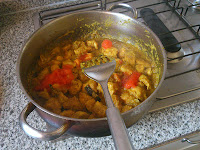 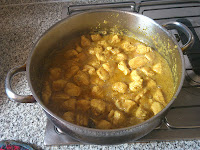 Top left, spice mixture when its cooked. Top right, adding the raw chicken.
Bottom left, adding the tomatoes. Bottom right, the dish just as the heat is turned off.


Traditionally, curries are often cooked with potatoes, so feel free to add some diced potatoes while the chicken is cooking. When to add potatoes is difficult thing to say as it all depends on the type of potato used. I generally add my potatoes at the same time as I add my chicken, and you can always leave the dish to cook till the potatoes are done.

Adding chopped peppers into the dish 10 to 15 minutes before taking it off the stove adds flavour, and gives it a nice colour. I don't like the peppers in my curries to be crunchy, hence the long cooking time! Finally, add a little yoghurt to the dish 5 minutes before taking it off the heat if you want to take the edge off the spices, or for a creamier taste.