Most of my trips back home involve gorging on food that only Bangladesh can offer. I can claim this trip was slightly different, if only because on top of the usual gorging I made an effort to explore the evolving restaurant scene in Dhaka. Izumi had been on my Wishlist for a while, not just because it was one of the newer restaurants in town, but also because it specialised in Japanese cuisine, a rather uncommon offering in Bangladesh.

The restaurant sits at the end of a quiet side road in Gulshan, away from the noise and pollution of the main avenue. The site is gated, and a short driveway leads up to the guarded main doors, typical of many establishments in Bangladesh. Walking through these doors we found ourselves in a large Japanese themed lobby, with a small reception booth to our left. I headed straight there to ask for a table, as the staff present seemed hesitant about approaching us. After a check of their reservations we were led through to the ground floor dining area, a softly lit room with generously spaced tables. Restaurants around the world should take note – especially higher end establishments who have no excuse for squeezing guests together like sardines.


Despite being a weekend, the floor was largely empty, and the other guests seemed to be businessmen entertaining clients or Asian expats out on expenses. We were seen to quite quickly by a polite and helpful waiter. He pointed out items on the menu the kitchen was current unable, unsurprisingly to prepare due to a lack of imported ingredients. While I sympathise with the hurdles Bangladeshi businesses must face importing unusual ingredients, it is something to be aware of before visiting establishments like Izumi. Our waiter helped us with our orders, talking us through the contents of each dish. He was vague about portion sizes though (good news: they’re big!,) and we had to do a bit of guesswork with amounts. 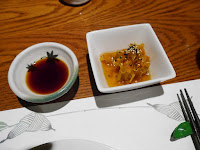 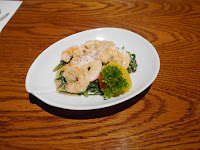 On the left, complimentary tofu with veg and sesame.
On the right, prawns and spinach in spicy mayo - stacked, so bigger portion than is obvious

Food arrived soon after we placed our orders, starting off with a complimentary canape of tofu muffled in shredded vegetables and sesame. While not particularly special, the tactic of serving a small canape was very much appreciated while we waited for our orders. The dish also made me feel we were going to get actual Japanese food - another plus. However, the rest of courses turned out to be a mixed experience. We'd ordered a starter of prawns and spinach in spicy mayo. The portion was rather generous here: more than enough for two and shareable between our three at a stretch. But while it tasted "Japanese" insofar as it wasn't somehow "Bangladeshified", it wasn't very good, and more in line with what I'd expect from a cheap restaurant elsewhere in the world. I felt similarly about our mains - the grilled miso chicken was a delight to find in Bangladesh, but it should have had more miso. Our garlicky king prawns were nice, but similar preparation can be had elsewhere in town for less. It was really the sashimi that saved the day, which was extremely fresh considering it must have been refrigerated for import, and was served beautifully as you can see from the photo in this post. Some of the cuts were a bit awkward, and a bit too large for a single mouthful, but it definitely satisfied our family's raw fish cravings.

The only sticking point I can imagine is the price, which was TK 3500 for the set before tax. This easily puts Izumi up there with an above average price for sashimi in say, London. In fact, the pricing at Izumi is my main criticism. The restaurant is easily more expensive than others of the same bracket in Dhaka, apart from maybe the newest 5 star hotels. A starter will you set back by around TK 1000, and mains cost from TK 3000 onward. Granted, portions are big enough to be shared, but our bill for one starter, two mains, a sashimi set, drinks and steamed rice came to a total of TK 12000 with VAT, or TK 4000 per head. This is a lot for Bangladesh. Imported ingredients or not, the food - the mains in particular - needs to be better than what we had for our visits to become regular. However, I expect the restaurant will survive on business meals and expats who have few options for eating out. To someone local, I would only say go if you need a sushi or sashimi fix. It will be good, but be aware that it's going to cost you a lot.