I come to Angola a few times a year for work, and cumulatively end up spending quite a bit of time in the capital Luanda. However, it's unfortunate that between long work hours and Luanda traffic I don't get to see much of the city. So I make the most of seeing the country however I can - from job related field visits to the places I go for food. Out of the places I've eaten in Luanda Qais de Quatro is one that stands out for making a good impression. The food is good, the setting is amazing and the vibe in the restaurant is very chilled out and positive. I'll say this now - I am also very biased towards the sea! 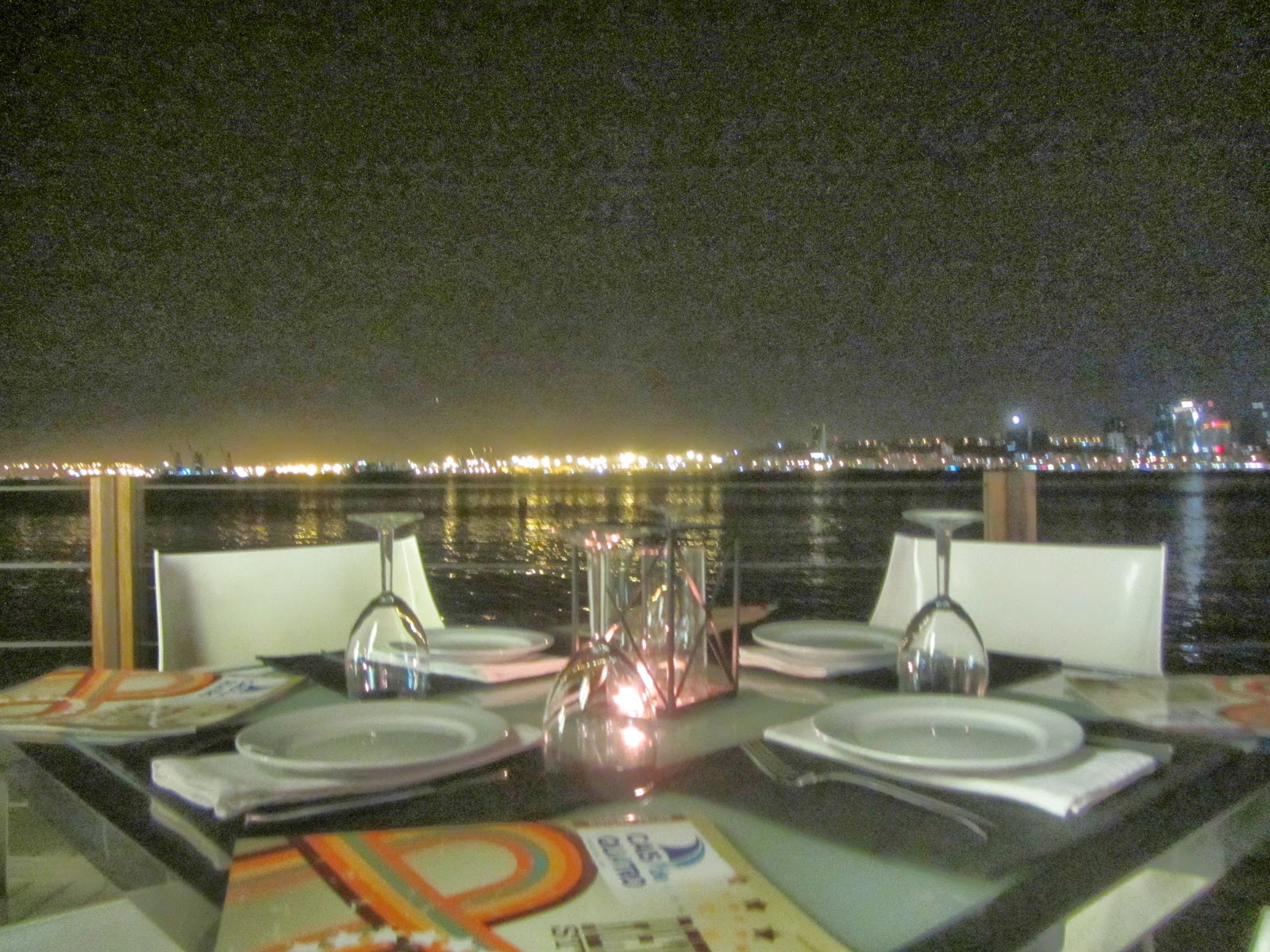 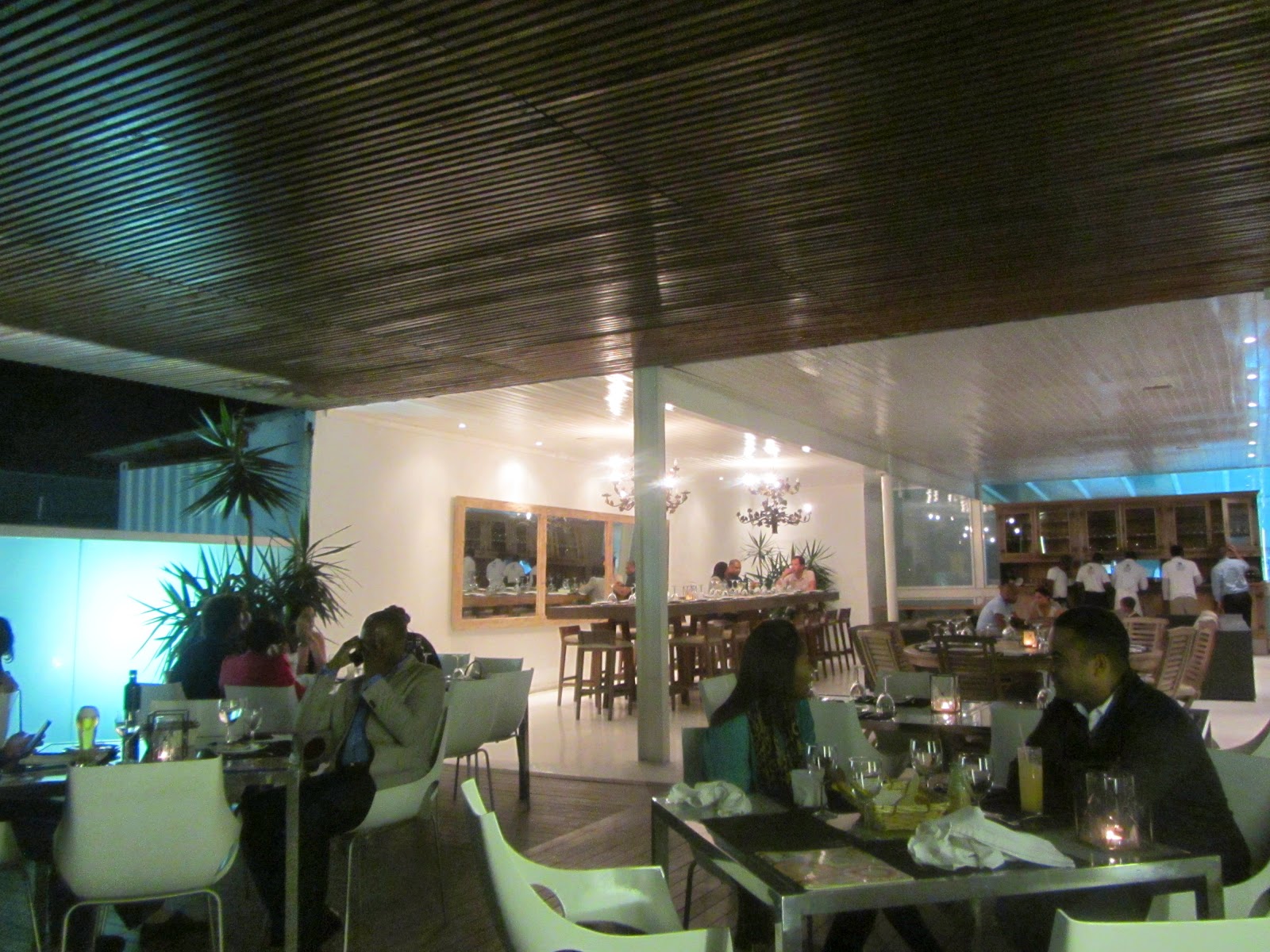 On the left, our table and on the right, a look into the restaurant

I've been to Qias de Quatro twice, and remember both experiences fondly. The drive into the restaurant does the place no justice – it feels like it’s in a back alley of the Ilha, opposite a worn down children’s day care centre. But walk through the wide entrance and immediately all this changes. Beyond the lobby area, Qais de Quatro is completely open plan and under open sky. In the middle of the space is a large bar, on top of which you have an upper floor of tables. On the far side of the bar there is a covered decked off area with tables by the water. Looking in, on your left beside the palm trees (yes, live palm trees in the restaurant!) there’s a long tank of fish, crabs and lobster at floor level. Near these are stairs which take you up to another completely open upper floor. 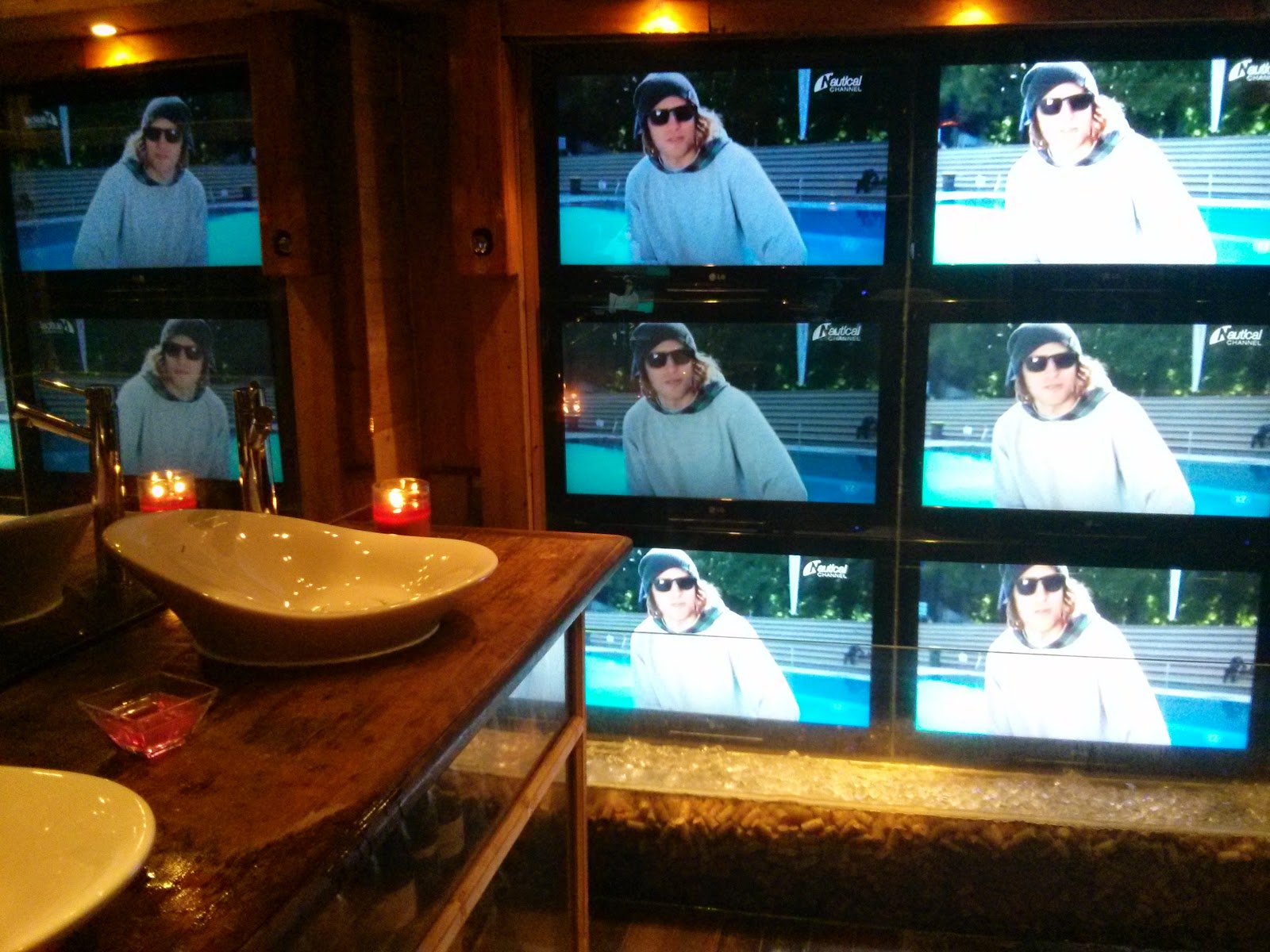 More of the interior

I’ve been to a few other establishments along the Ilha, including Lukal and Coconuts, but none of these come close to the beach resort charm of Qais de Quatro. I feel that my limited photography skills do the place no justice. But at least I can show you the place, even the urinals in the toilets that are equipped with widescreen TVs!

The first time I came for dinner it was as a small group of four. We had one of the tables right by the water with a splendid view of the bay all lit up. We were shown to a table quite quickly despite it being Saturday night and were given menus right after. A waiter brought over bread, butter, olives and a tuna spread quite quickly. Nothing special to mention here, but the tuna spread was welcome as something a tad more interesting than just butter and olives. There were several types of bread, and these were fresh although probably not baked on the day. Ordering food itself was a quick affair as my dinner companions were Angolan - they were able to both recommend dishes from previous experience as well as talk to the wait staff better than I. Service was a little slower the second time as we had no fluent Portuguese speakers with us. We had a large table booked and were shown to it immediately, but ordering was a little difficult because of the language barrier.


On the first occasion we shared a few small spring rolls as a starter. These were a little too greasy for my liking and the shell a little thicker than ideal. The final result was only vaguely similar to a traditional spring roll, and while it wasn't awful I can't recommend trying these. This is especially true as I know Qais de Quatro can do a lot better, which I realised when we ordered a sushi platter on our second trip. The sashimi and maki sushi were good - not on par with the better sushi experiences I've had outside Japan, but certainly commendable. I'd avoid any sushi with prawn though, as it had a strange over-boiled taste. 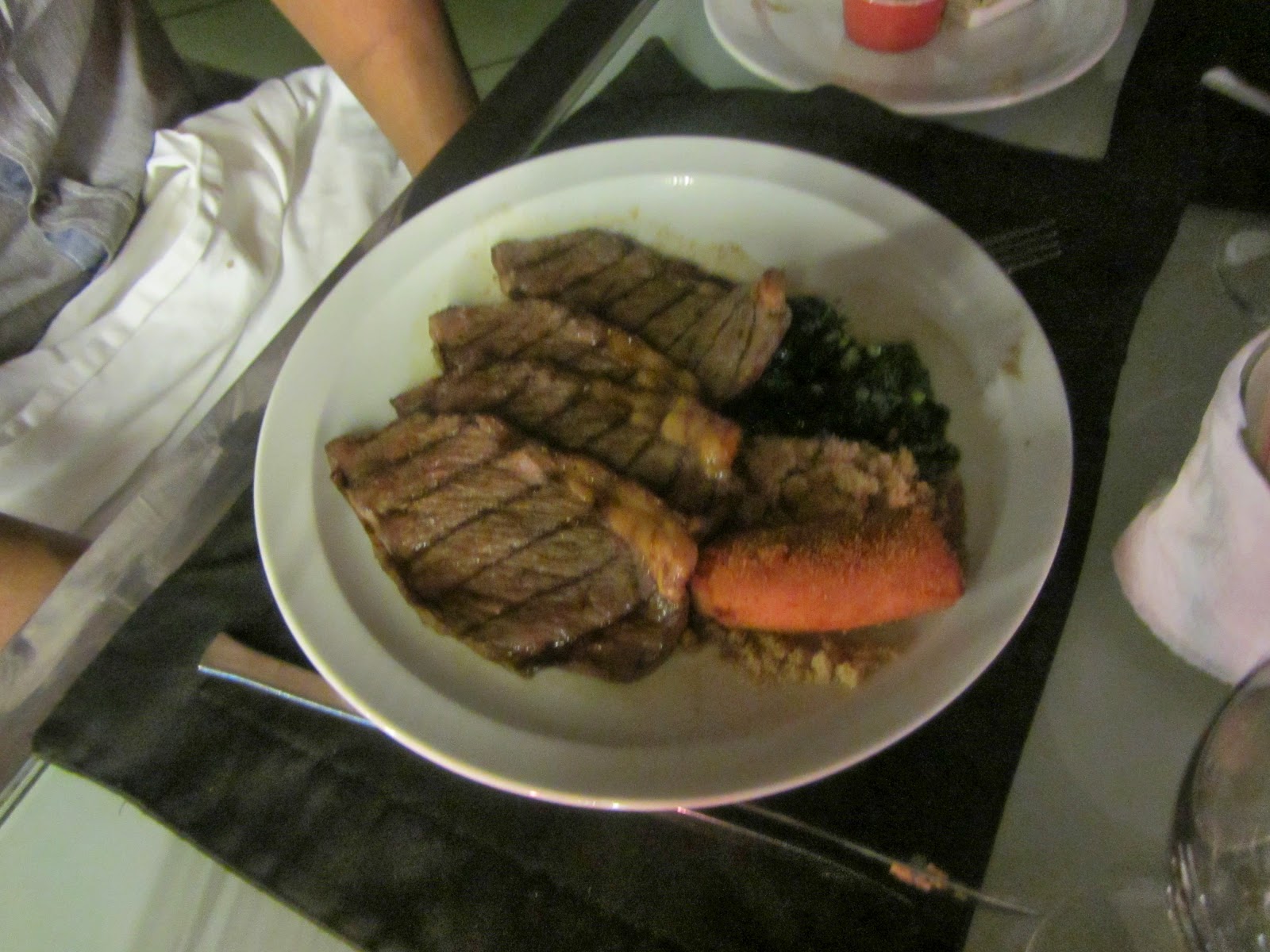 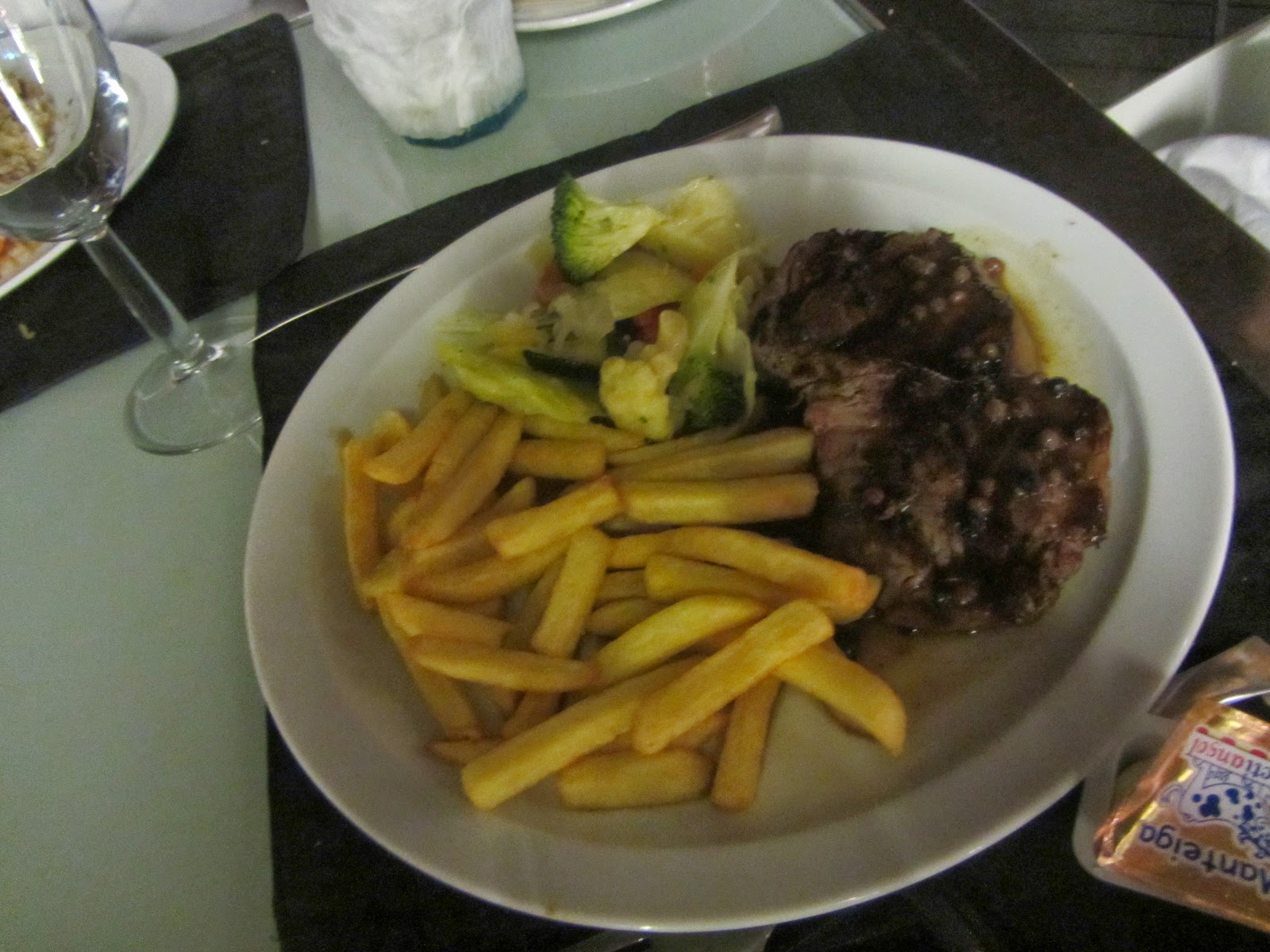 The performance was more balanced with the mains. The menu encompasses a whole range of cuisines, from a few Angolan and Portuguese dishes to Italian, Moroccan and Thai. I’m always wary of menus that have such breadth as they have so far in my experience implied a jack-of-all-trades but master-of-none situation. This is definitely the case with Qais de Quatro, but the dishes they produce are perfectly fine as long as you are happy with inspirations from the original region rather than an out-and-out authentic dish. I’ve always found Angola is good at fish, and this was again the case with my grilled fish skewer on my first trip. To be fair, this dish was simple and hard to get wrong. My dinner companions on both occasions ordered steak – and typical to what I’ve found in Angola these were always well seasoned and well done. No matter how you ask for it.


We ordered a large number of mains between us during the second trip, but unfortunately I don’t recall the feedback on them all. I had a dish called Bangkok Beef – which was beef cooked in soya and oyster sauces served with a side of rice and vegetables. A safe order like my previous dish, and if you’re suspecting a theme here you’d be right – I’ve been burned in Luanda before! While nice enough, it was something you could make yourself to the same standard at home. The portion I received was rather small, however, and I had the same complaints from my fellow diners. Amongst them, one ordered lamb chops with cous cous and another carbonara. Both gave me feedback similar to mine on the quality of the food.

I am sad to say I only had one dessert at Qais de Quatro because on my second trip I was trying to cut sugar out from my diet. On my first trip though, I tried a hot pancake of sorts, wrapped around a filling of vanilla ice cream and drizzled with chocolate sauce. Not particularly unique and not even the best ice cream, but if you’re looking to knock yourself out on sugar this is definitely your choice. It’s one of those brownies-with-ice-cream type desserts that you can rarely go wrong with.

Service throughout the meal varied. It started out very professional and quick. The vibe throughout remained very positive, as did the attitude from the waiters. However, the attention slowed on both occasions over the course of the meal, especially towards the end. This was the case whether we spoke Portuguese or not. Given this is a beach venue, and the general relaxed environment in Angola, I wasn’t overly surprised. It’s just something to consider if you want a quick meal. The bill came to about Kz 8000 to Kz 10000 ($80 to $100) per person both times. Note the first time we had cocktails, a shared starter, mains and desserts. The second time we had a shared sushi platter, mains, no desserts but plenty of beers. This isn’t a bad price for Luanda – especially as far more mediocre places will charge you the same. Also, prices on mains in the menu can range from Kz 2500 to Kz 5000, so you can adjust to your own budget. Still, I would expect a Kz 6000 spend here at least.

I left Qais de Quatro happy at the end of both meals, feeling like I’d finally had a bit of that beach holiday I’ve been craving. I was extremely tempted to give the place a higher score, based purely on the views of Luanda bay and the atmosphere it imbues into the venue. However, given my slight criticism of the food and service I've held back. That being said, neither of these should dissuade anyone from going - the score below is still very respectable. And if you go at night, try and get a seat on the upper floor!