If you've read my review of Nobu, you'll know I went in wondering if the Michelin star was worth anything. I walked out thinking that it was, but after my visit to Simon Radley's restaurant at the Chester Grosvenor late in 2013, I am reconsidering my opinion.


I was in Chester for work, so it was nice to have a personal distraction for an evening. I booked on short notice for a weeknight, which is what I imagine made it easy to get a table. Nevertheless, I doubt that Chester experiences the same kind of booking frenzy as London or even Birmingham. The website stated that smart attire was preferred and I went in suited up and a little worried about being overdressed. Being me, I got lost as soon as I entered the hotel and had to be directed towards the restaurant. Upon stepping into the dining room and looking around, however, I saw enough suits around the tables for me to not feel out of place. The venue is gorgeous, in the gaudy sense of word. As you can see from the photo above this is fine dining, with plush carpeting, fancy tableware and very formal wait staff. 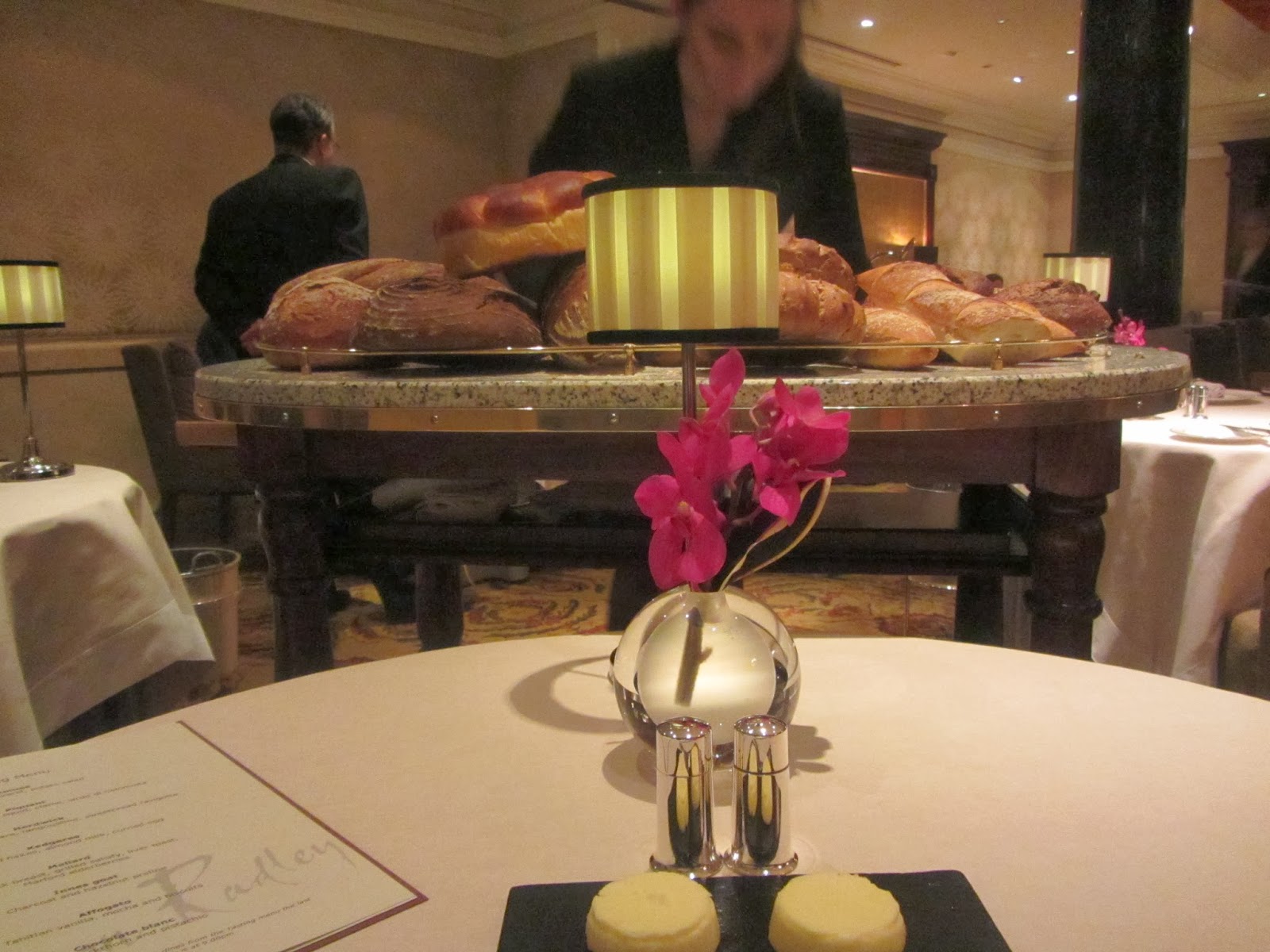 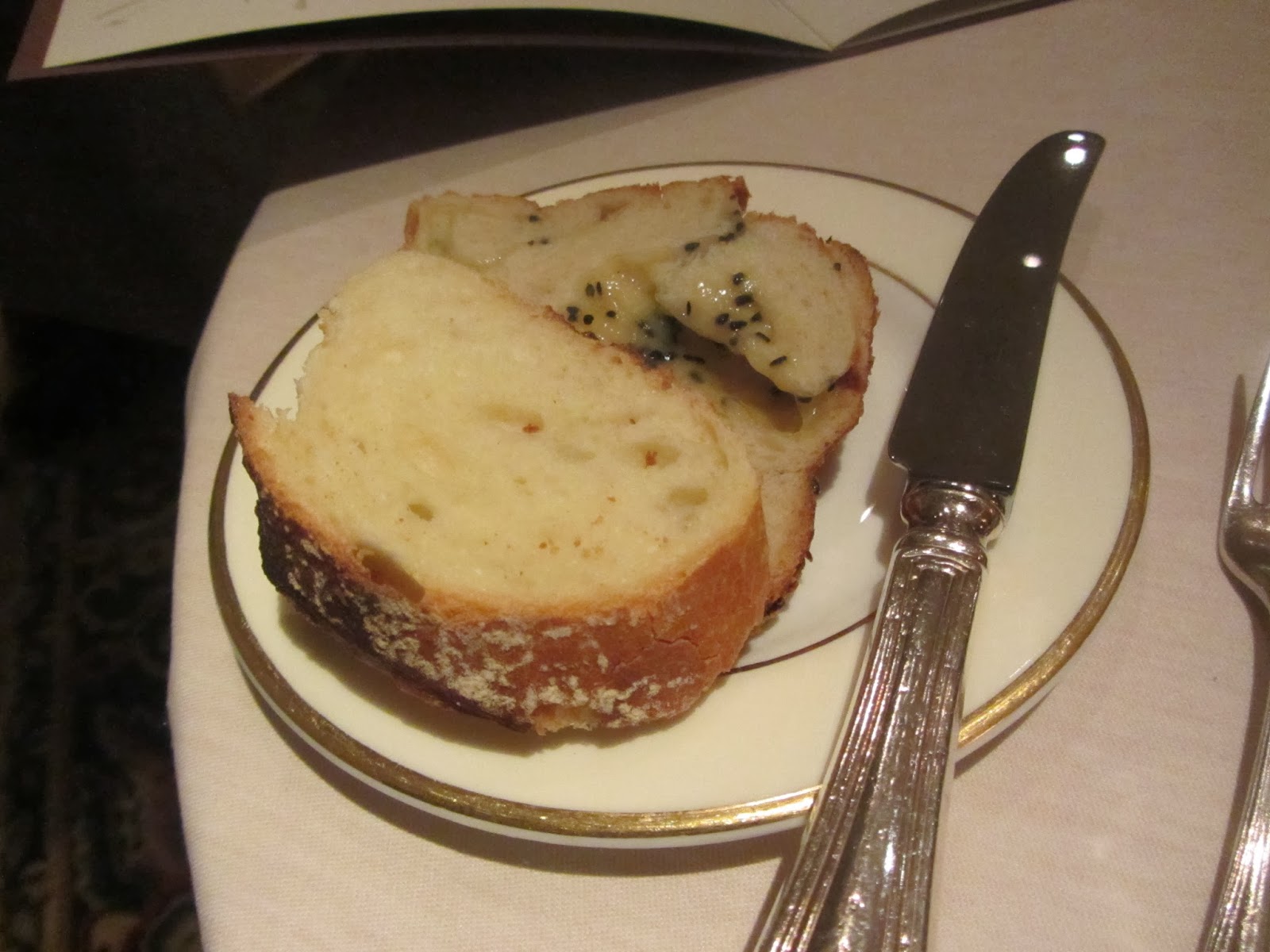 On the left, the bread trolley.
On the right, my bread selection - French baguette and something with cheese and cumin.


At the entrance, the maitre d' asked for my name and then directed a waiter to take me to my table. I'd mentioned during my booking that I'd be opting for the tasting menu, so there wasn't much of a preamble to my meal. A waitress brought me a menu for information, and also took orders for my drinks. For anyone curious, fancy non-alcoholic are aplenty on the menu. Another waitress then trundled towards with me with a massive bread trolley, which I believe is a well known trademark for this particular establishment. I went for a French baguette (to allow me to gauge authenticity); and something with cumin and cheese (because it sounded interesting). Initial impressions were mixed. The cumin and cheese thing was great. The baguette, on the other hand, was good but did nothing to remind me of my childhood in Paris.

The wait from bread to amuse bouche wasn't insubstantial, although it didn't help that I was dining alone. I survived by Whatsapping a friend, who helpfully sent me pictures of cats. Eventually, a waiter brought my mackerel and potato salad to the table. I always have my reservations about mackerel because it can be a rather pungent fish, but this was cooked well. The potato salad was, as you can see from the photo above, rendered to a cream but tasted exactly as potato salad should. Sadly, apart from my newness to molecular gastronomy there was nothing that actually excited me about this dish, particularly in terms of taste. Exciting presentation and strange new textures are great, but they are not substitutes for tastes and flavours.


My friend abandoned me as I moved into the first course, but this was fine since the food arrivals seemed to pick up pace. Piquant was a vinaigrette of leeks, squid, clams and lardo di Colonnata - the last of which the restaurant were happy to remove for me since I don't eat pork. Plus points for them there. The dish was obviously well thought out – each of its elements combined to produce a good, balanced flavour. Unfortunately for me, it also meant that I had to remember to eat one piece of leek with one piece of squid and one piece of clam, all dipped into the right amount of foam. Unsurprisingly, I got my foam to mouthful ratio wrong, and ended up desperately dragging my squid around the plate hoping to soak up any leftover foam on my last serving. Perhaps I’m being overly critical, but I felt that the dish, and sometimes tasting menu dishes generally, could be better proportioned. But most importantly, despite the complimentary flavours and the technical ability that must have gone into the dish, the final result – while good – was not worthy of any particular accolades.

The next course was the Herdwick - a serving of veal tartare with langoustine and sweetbread ravigotte. The strange names on all of the dishes had me curious, so I Googled and found that the Herdwick is actually a type of domestic sheep. I am faintly curious as to why the restaurant felt the need to name a veal dish after sheep. Not that it matters to me greatly, since I am mostly just typing this to create a sizeable paragraph. You see, this course was rather forgettable and I have no particular opinion to offer on it.

Up next, however, was one of the most interesting parts of the meal. The Kedgeree was a curried egg served with smoked cod flakes and almond milk. For me, the flavour here was the most distinct feature - the egg smelled exactly like the food my family in Bangladesh would cook on a traditional earthen pit stove with kindling. Each mouthful brought back memories of my father's village home in Sirajganj, for better or worse! But this was a rather personal experience, and I cannot see why this dish would be special to the average person. Even the flavour imparted to the dish was hardly a great technical feat, usually achieved by burning charcoal through a filter over the food after cooking, if not cooking on kindling directly.

After the rather surprising trip to Bangladesh, it was time for the main course. Mallard - which was wild duck breast with grilled salsify, liver toast and elderberries. I usually hesitate before ordering duck in a restaurant, as the flavour can often come out wrong (read: under-seasoned and under-cooked!). Thankfully, this was neither, and provided a nice finish to the savoury courses.

I knew that I had three courses of dessert left, which was very exciting until I remembered that the desserts would be tasting menu portions as well. First up was the Innes goat, charcoal and hazelnut praline. Unfortunately, my food memory is failing me with this particular offering and all I remember is that it didn't leave a negative impression.


Once I was done with the praline, a waiter brought over the Affogato, consisting of Tahitian vanilla, mocha and biscuits. It was nice, although it didn't compare favourably to other similar desserts that I've had - the most recent example being the Suntory whiskey cappuccino at Nobu.

The final dessert, chocolate blanc, was undoubtedly the best. I'm not actually sure what I ate, but I recall creamy white chocolate and pistachio paste with something a fruity on the side. I'm glad the meal ended on a high with this dish, but equally, this drove home the fact how much I wasn't impressed with the other courses. All of which, I have to add, were small even by tasting menu standards. I also realise as I write this that none of the wait staff (bar the waitress serving the bread) explained to me what each dish was. This was done without asking at Nobu. Unfortunately, I only have that one other starred restaurant to compare to, so I cannot be sure if such interaction should be common practice. I did, however, miss it at the Simon Radley. Otherwise, the service was good even if the staffs' mannerisms weren't completely smooth.

My bill came to around £75 with service, so I cannot say that the restaurant is value for money. This is especially true since none of the food was overly special. My only good food memory from this meal is the chocolate blanc, and that is probably influenced by my bias towards desserts. I do not understand how food of this standard deserves a Michelin star. On the basis of this experience, I am not surprised at reviewers who say restaurants like Lasan merit stars too. I wonder if the focus of Michelin stars is overmuch on fancy, technically ambitious tasting menu items. I suppose I shall find out in time as I visit more establishments. I also wonder if these chefs can actually serve proper meals while maintaining their purportedly high standards - and perhaps going a la carte will answer this question in the future. In the meantime, I must conclude by saying that the Simon Radley is a nice restaurant, but only merits a visit if you want an impressive venue for dinner and have the money to spare.