I've never lived in London long enough to discover its hidden secrets, those amazing little places tucked away in the nooks and crannies of the big city. Instead, I've done the next best thing, which is to rely on my more local friends for their insider information. And that's how I found Royal Thai. A friend suggested we drop by one night, promising that I'd be impressed by the food despite my teenage years in Thailand. And indeed I was, so much so that I insisted that we come here for dinner again the next time we met. The venue has now become a regular fixture for me - I've made several visits with friends and family, and its the first recommendation I make for Thai food in the British capital.


The restaurant is actually 5 minutes from King's Cross station, but in a quieter part of Caledonian Road. It doesn't get as busy as some of my other favourites in Soho or East London, though I do recommend booking for dinner on weekends. The venue is reasonably sized, with tables spread over the ground floor and a basement, but it does fill up during the evenings. The decor is smart and laid back - think dark wooden tables, light colours and Thai decorations (photo above). The staff have always been friendly and attentive, though they rarely have time to stop and chat (if that's your thing, it's not mine). The menu spans the typical dishes one would expect from a Thai restaurant in London, but everything is excellently prepared and the closest I've found so far to food in Thailand. 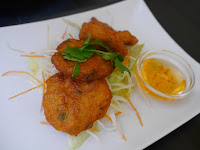 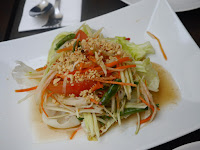 On the left, tod mun pla or delicious little Thai fish cakes.
On the right, som tam or papaya salad.


There are a few dishes that I try at every Thai restaurant - essentially my favourites - which I use to decide if I'm coming back to that particular restaurant. Of course, Royal Thai passes on all counts. My favourites starters are above: tod mun pla or Thai fish cakes, and som tam or papaya salad. The fish cakes here are perfect, and the som tam almost so. I'm used to the Bangkok street food version of this salad, spicy and sour with quite a kick. There's nothing wrong with the version at Royal Thai of course, but it's a little toned down, I'm assuming for the local palette. Other favourites from the starters include the king prawn tempura and the tom yum kung soup - though again expect the latter to be a little less hot and sour than usual. 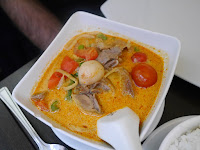 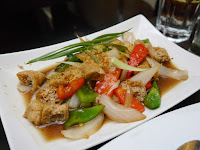 On the left, duck Thai red curry.
On the right, tofu, garlic and pepper stir fry.


When it comes to the mains its even harder for me to pick favourites. The king prawn pad kee mao - photo at the beginning of this post - is noodle heaven. I'm personally not a big fan of pad Thai, but the richer pad kee mao is exactly my style. Another long time favourite is the pad kra pao gai, or Thai basil chicken, and I love the version at Royal Thai. It's again the closest I've found to what I used to have at school and on the streets near my house in Thailand. The basil is a little less pronounced than I'd like, but I doubt there's any way around that given the air miles it must travel. Other dishes I'd recommend from the mains include the red curry, and in particular the duck version (photo above) - it's mild enough for most, and I much prefer the chewy duck meat to chicken. I also really love their simple garlic and pepper stir fries - having tried the beef, chicken and tofu iterations. I know this is a very simple dish, think soya and fish sauce pretty much, but nothing I can make at home compares to what they do here. The tofu version (photo above) is actually my favourite, I kid you not, especially as it takes on the flavours of the sauce so much better than meat. I may also have a soft spot for fried tofu - which is an odd adulthood character flaw I've acquired. But speaking of vegetarian food, there are lots of vegetarian options on the menu here - both amongst the mains and starters.


Shockingly, I've never had dessert here. I can tell you they have a few options on the menu, but nothing more than that - which feels strange given how much of a sweet tooth I have. However, you can expect to pay around £20 for 2 courses and a non-alcoholic drink here. That's amazingly good value, especially since this is a proper sit-down restaurant. Starters are priced between £5 to £8 mostly, while mains start from £8 and rise to the £15 mark. The higher prices are for the fancier fish and seafood dishes - some of which, like the battered whole fish cooked in lemongrass, are on my to-try list. Rice is an extra on top of the mains, but only around £2 for steamed rice or £3 for coconut or egg fried rice. I eat at a lot of expensive places around central London, but most of that food doesn't compare to this place. Which just goes to show, don't be fooled by fancy branding and marketing - and instead come to Royal Thai.

NB. The final score, while influenced by the sub-scores, is a qualitative reflection of my overall impression the establishment.