The Café That Does Everything

Kalm Kitchen is the café that does everything I need a café to do. The coffee is good, the selection of teas acceptable, and cold teas are stocked throughout the year. They do breakfast, lunch and Sunday brunch, and maintain a well-stocked counter of muffins, brownies and other tray bakes for the times in-between. Most items are reasonably priced (you can have a decent lunch here for £6) and the staff are always friendly and helpful (except the boss, who is friendly and helpful and scary). The place started life as Glutton and Glee, before changing ownership and rebranding to Kalm Kitchen. A brief dark period followed – the cakes on the counter disappeared and extras on sandwiches became miserly – but that period has passed now. I don’t know the story behind the takeover, but I have come to like the changes. The new owners added some counter style seats, which may not be all that comfy but it means the café (which is tiny!) can now serve more people. The elaborate cream cakes are no longer regular fixtures, but tray bakes, cupcakes and brownies have taken their place. Early on during the switch these would run out too quickly, but nowadays they seem to stock enough to keep them going till closing time. My favourites are the richer options (of course), such as the peanut butter brownie or orange cannoli.


Breakfast options cover the usual: from simple pastries, toast and cereal to eggs done in various ways and full-English. I usually opt for the scrambled eggs and smoked salmon, which come at a generous portion for around £6. For lunch, you can have a sandwich (all conventional, unimaginative fillings) and some veggie crisps, also for around £6. Or you could have a savoury bake with two salads for around £6 – the option I would recommend. The savoury bakes are usually the same: a salmon and couscous parcel, a chicken and chorizo muffin and a sweet potato and cottage cheese muffin (the latter being my favourite). There is a rotating selection of nice quiches, though I’ve never pinned down a pattern and they run out quickly. The salads, surprisingly, are the best thing at Kalm Kitchen – like the sandwiches the combos are often quite common, think chickpea, feta, apple, walnut etc., but they taste so much better than salads elsewhere. I’ve never done so myself, but presumably you could have a bigger portion of these for lunch as well.

Brunch is served on Sundays only (I wish they did Saturdays as well!). The menu expands to include a few more options such as avocado-on-toast, pancakes and waffles. Just be warned that the waffles are obviously pre-made and reheated, and can come out rock hard. It is worth pointing out at this point that the food here is good rather than exemplary (aside from the salads, which are exemplary). The main strength of this place is the breadth of what is on offer. No other independent in Guildford town centre that I know of does anything similar. The helpful staff and the overall friendly vibe are also a definite plus. The venue is mostly value for money. I say mostly because despite the reasonable costs I’ve quoted, some items seem priced strangely – i.e. avocado toast with only a smear of avocado for around £7, or tiny portions of tray bakes for almost £3. 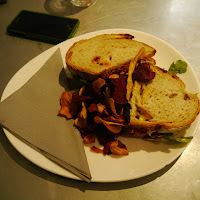 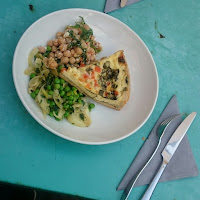 On the left - the sandwich with vegetable crisps: £6,  meh.
On the right, quiche with two salads: £6, much better!

The current owners are actually wedding caterers, and I’m guessing this café is an advertisement of their abilities rather than the main focus of their business. In fact, I struggled to find a mention of it on their website, let alone a full menu or opening times. Despite this, it is remarkably well run and offers a good selection of food, and remains fixture for me whenever I’m in Surrey. A review and a blog post for this place was long overdue!

NB. The final score, while influenced by the sub-scores, is a qualitative reflection of my overall impression of the establishment.
Posted by AC