Our annual trip to Edinburgh for Fringe was slightly chaotic this year. On the Thursday night, we were still looking for a place to book for dinner on Saturday. We thought everything would be packed, but by some stroke of luck Sushiya were able to give us a table for 5 at 8pm. The place had come highly recommended by word of mouth, and it was just 5 minutes from Haymarket Station, letting us catch the last train home after stuffing our faces. I had been told it was small and casual, and I knew nothing beyond that as I refrained from Googling (I've decided to make this rule for places that people IRL recommend!). At worse, I thought, we'd have some reasonably priced sushi. However, we actually had great sushi, and I came away wishing that my local was as good (sorry Yorokobi!). 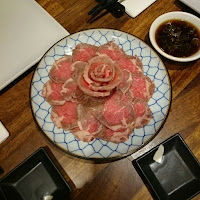 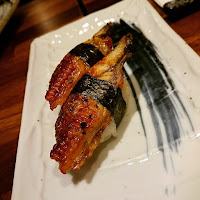 On the left: 20 pieces of beef tataki
On the right: BBQ eel nigiri

We were, I suppose, the perfect group for a sharing menu: at least three of us were sushi-obsessed, accompanied by two other easygoing diners. At the very start of the meal, we rattled off a long list of "wants" to our waitress, and bolstered this with two or three additional dishes during our meal. I will let the (phone) photography do most of the talking but I'd like to say that my favourite dish of the night was BBQ eel nigiri - sweet, oily and luscious. The Tokyo roll deserves an honourable mention - I have a particular weakness for the nori, breaded chicken and mayo combo. The beef tataki was very fresh, and I almost felt like I didn't need the sauce to swallow down the slivers of meat. I was also impressed by the soft shell crab roll, which isn't one of my usual preferences. 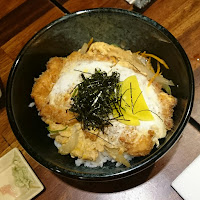 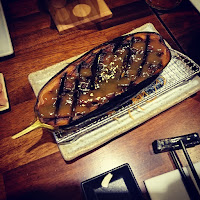 On the left: chicken and egg donburi
On the right: grilled miso aubergine

Most of the prices were very reasonable: 5 pieces of sashimi cost £5 and upwards, most sushi costs £4.50 and upwards, rolls start at around £8. The rice and noodle dishes hover around the £10 mark, apart from the fancier beef sirloin and mixed seafood dishes. The only surprise is the tempura, which starts at £8 for a rather small portion. Dessert is limited to sesame or matcha ice cream, and will perhaps feel an unnecessary expense for £4 a scoop, but it is good quality. In fact none of the ingredients - raw ingredients included - made me feel like the restaurant was skimping on quality. We paid £30 per head for food and alcoholic drinks, and I wouldn't claim this is a cheap meal, but it is good value for money considering what you get.


My only advice would be to skip the noodle and rice dishes unless you need something big to fill you up. The oyakodon (or chicken and egg donburi) we sampled was good, but not great. Similar, or even better versions of those dishes can be had elsewhere, albeit probably for a bit more money. Visiting in a group of three or four is also a good idea - this gives you a group small enough to fit the space there but lets you try a large cross section of the menu. Service is quick and friendly, but at no point did we feel like we were being pushed out,, even on a crowded Saturday night. Beware that the seating isn't the most comfortable: high stools and tables abound, simulating counter-top eating everywhere. Indeed, the restaurant does feel like a bit of a takeaway, though it probably seats almost 30. Given the size, I would definitely recommend booking before you go. And if you're in Edinburgh and like sushi, you should definitely go.