I was in Edinburgh with my partner earlier this week for a short city break, and Castle Terrace was intended to be the culinary highlight of the trip. Sadly, it proved to be a rather jarring disappointment and as such, I will be relatively brief with my descriptions here.


We arrived at our booked time to find our table was ready, so skipped the offer of going to the bar for drinks: we'd spent the day walking around the city and were were quite hungry. The dining room we were shown to was dimly lit, with dark furniture and muted accents of colour here and there. Our waitress sat us down in a space slightly offset from the main area before bringing us copies of the menu and wine list. Another waiter appeared all of two seconds later asking us if we had decided on drinks. We sent him away so that we could at least open the wine list, which I can report had a respectable non-alcoholic section. We settled on drinks and, for the sake of freedom, opted to go a la carte with our food. 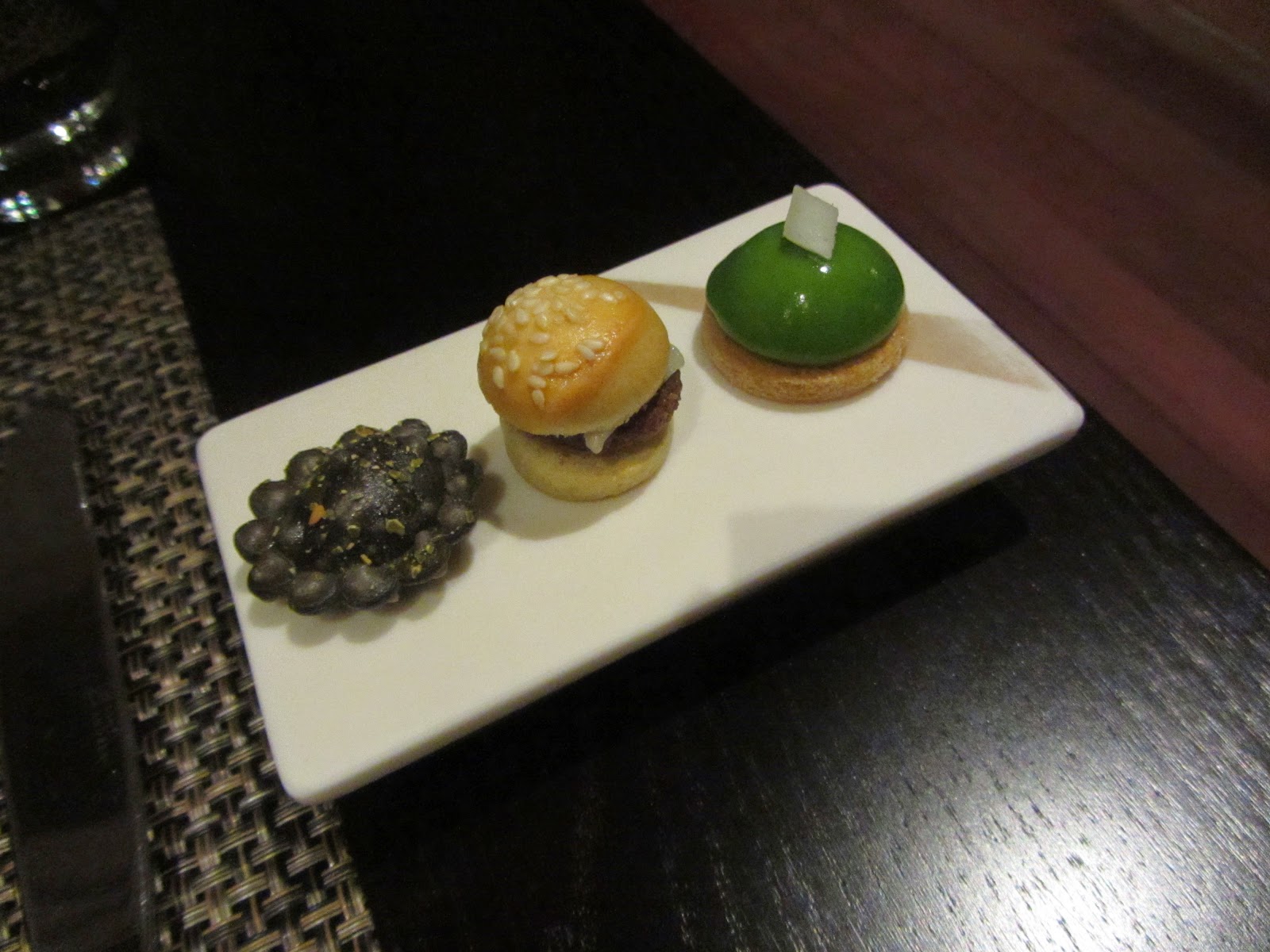 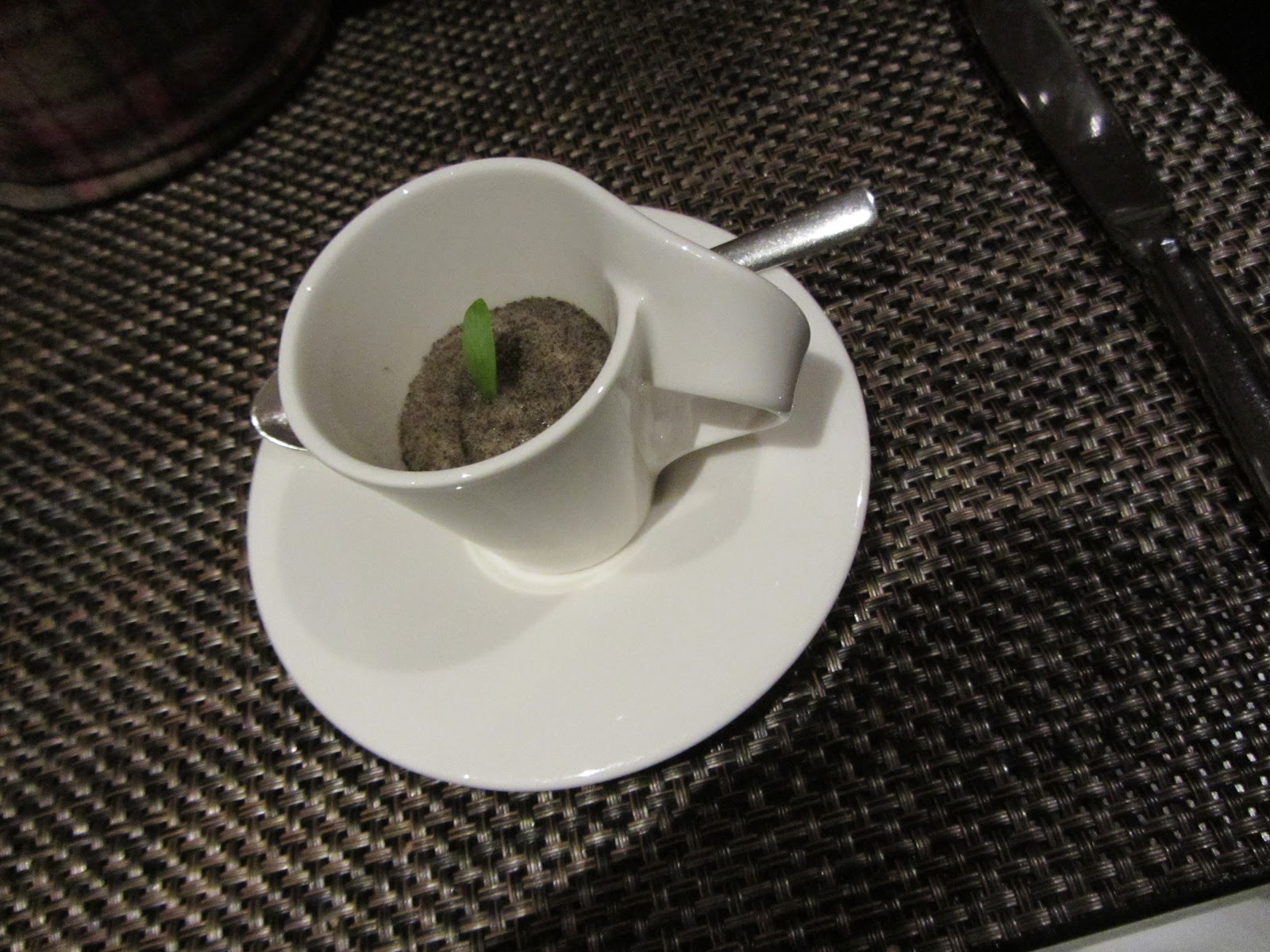 On the left, cod, a mini burger and liquid caesar salad
On the right, pureed carrot, coriander foam and cumin crumble

Our waitress returned a more tactful amount of time later to note down our choices for both food and drink, and followed up with servings of very fresh bread and an amuse bouche. The caesar salad bubble in green stood out for taste and technical achievement, but both the black inked cod and mini burger were eye candy more than anything else. The bread got better over the meal as it cooled down to an edible state. Our second amuse bouche was carrot puree, coriander foam and cumin crumble. While interesting and undoubtedly technically accomplished, it offered nothing special in terms of taste and was quite unnecessary as an item of food. 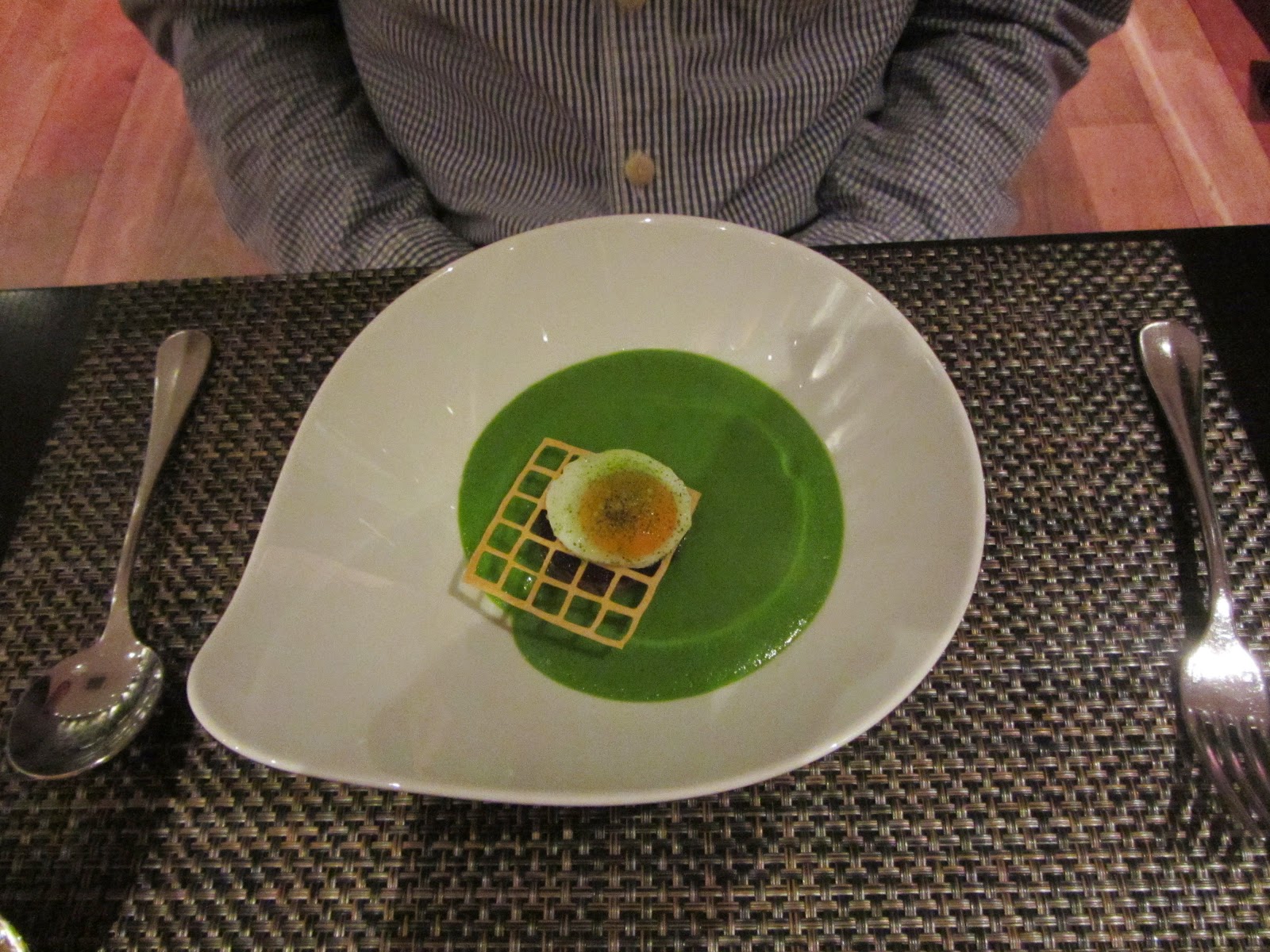 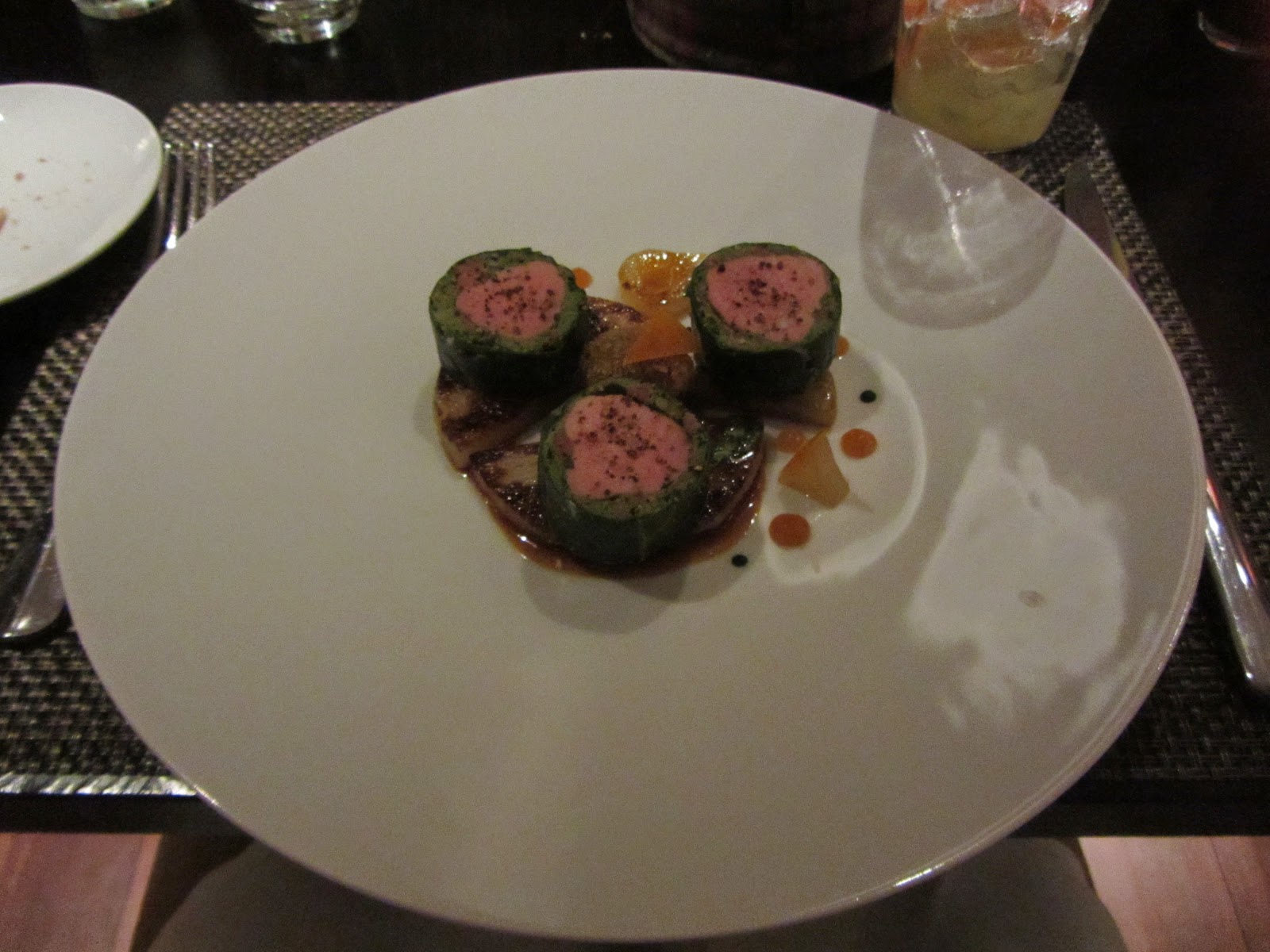 On the left, pea soup with quail's egg and crisp ox tongue
On the right, pork with ham hock orange, basil and mooli

At the very least, the amuse bouche selection helped us pass the time as we waited for our food. My partner went for the pea soup to start. It was accompanied by a mound of crisp ox tongue with a fried quail's egg on top, and made for a nice combination of textures and flavours. The soup was a little too thick, however, and consequently appetite-numbing. His main of Ayrshire pork with ham hock, orange, basil and mooli I cannot comment on, but tellingly the dish remained unfinished. 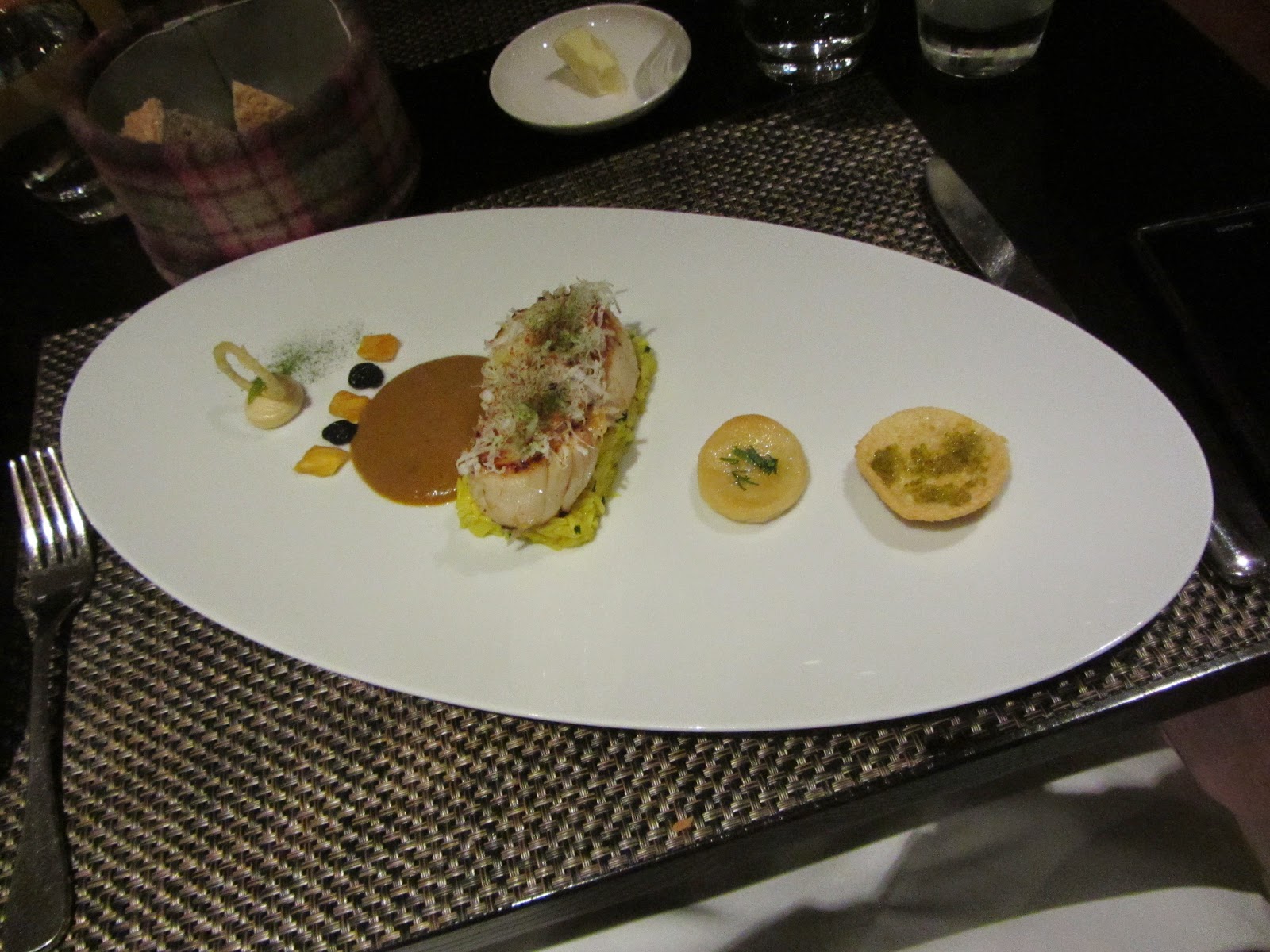 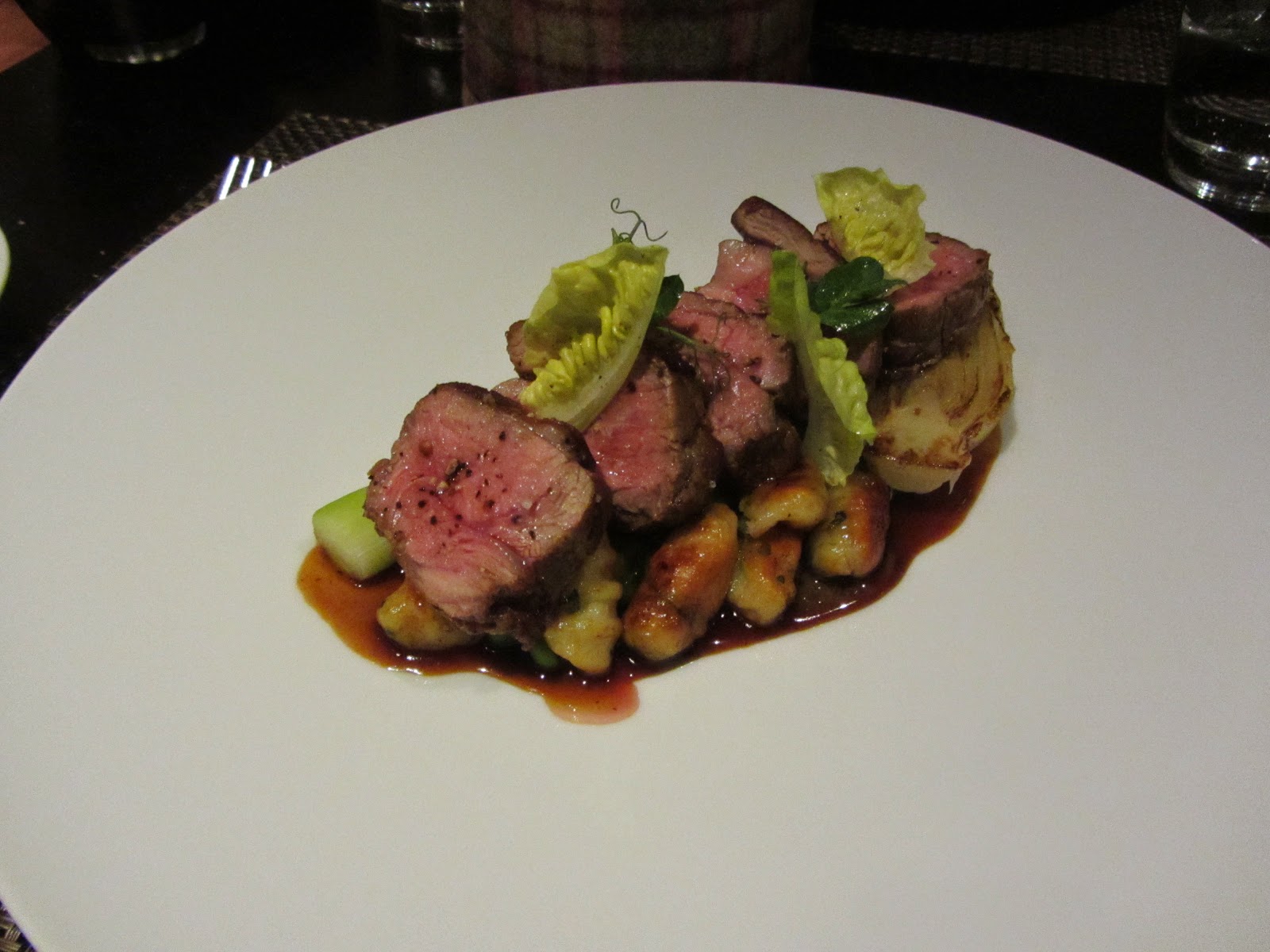 On the left, scallops on a bed of basmati rice accompanied by curry sauce
On the right, Inverurie lamb with gnocchi

My meal started off better the scallops with curry sauce on a bed of basmati rice - a combination that proved to be truly divine. The accompanying poppadom, naan, pineapple etc. were largely superfluous, however. My main of Inverurie lamb with gnocchi continued the positive experience, until I found an eyelash in my vegetables. Not quite as bad as finding a hair, but unpleasant nonetheless. When I brought this to the attention of our waiter, he expressed his surprise and said he would inform the chef, but no apology was forthcoming then or at any point in the meal. 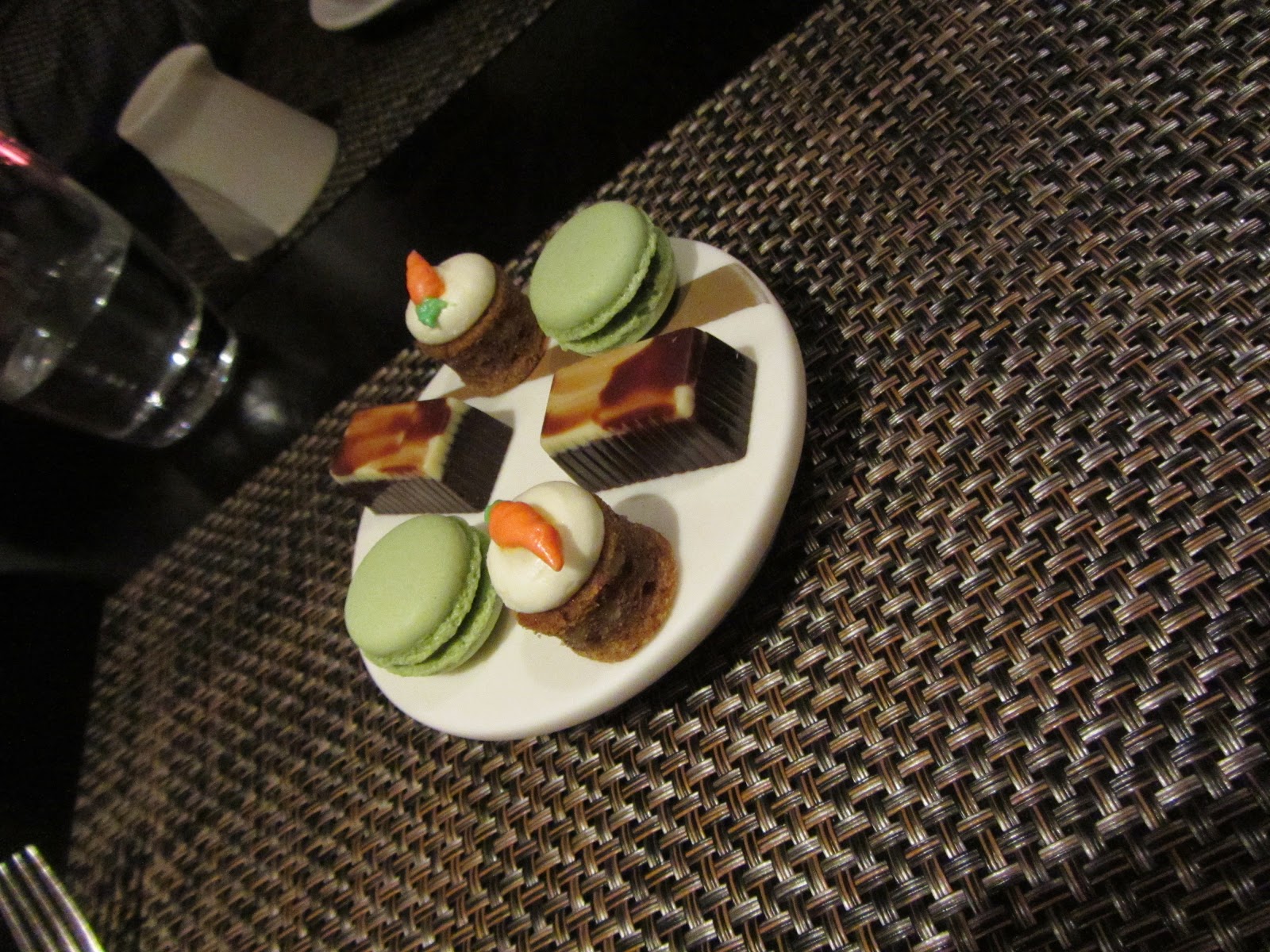 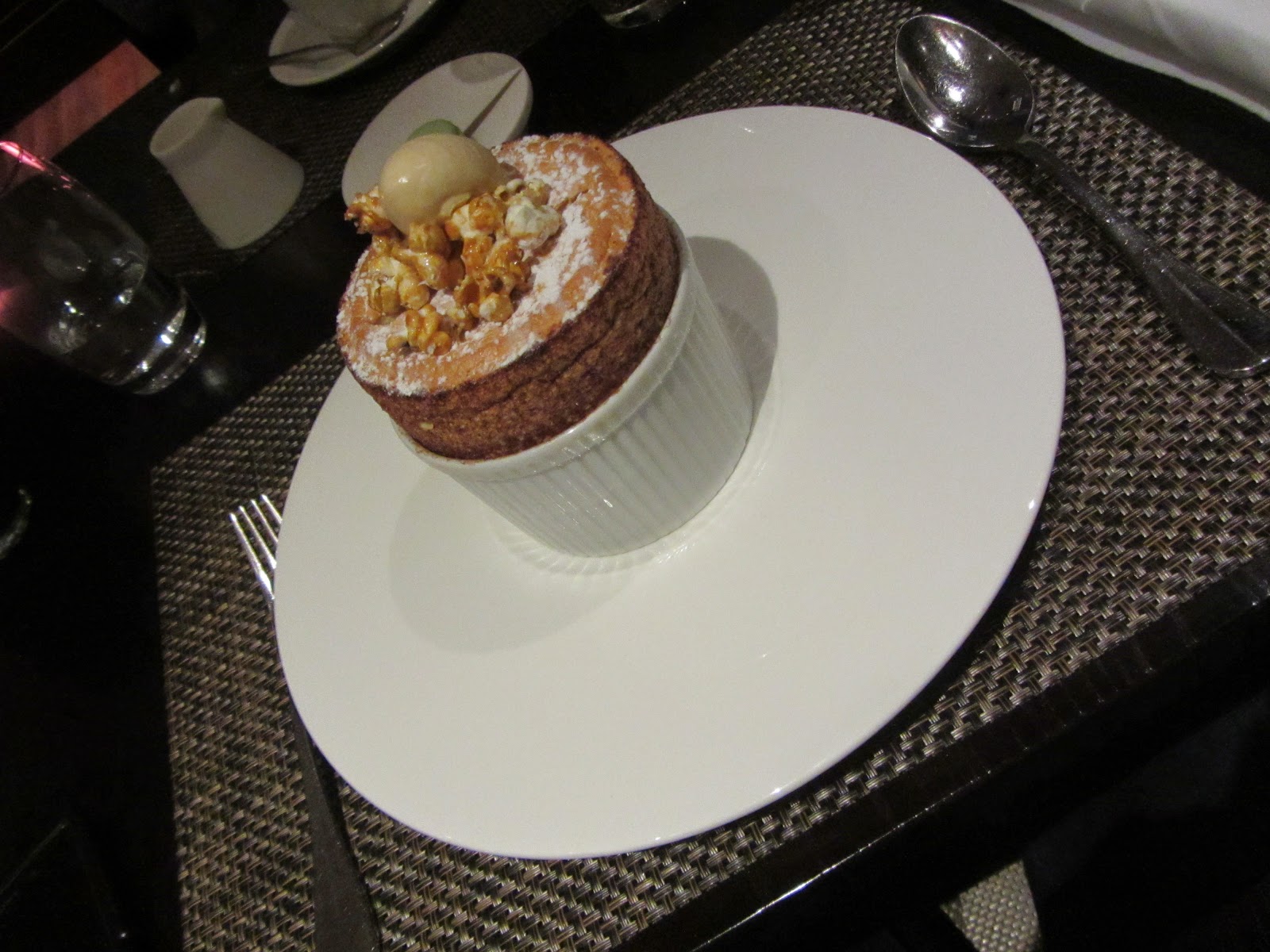 Despite being disappointed with both the meal and the service, we persisted by ordering coffee and a caramel soufflé as I hoped dessert would salvage the experience somewhat. It didn't - my caramel soufflé looked promising, but was served with the most miserly portions of chocolate ganache and popcorn ice cream. I was only halfway through before all I was left with was sweet, fluffy egg. The coffee was passable, as were the petit fours. We asked for the bill, paid the £120 plus service and left as quickly as possible. For 3 courses at dinner with non-alcoholic drinks, it was cheaper than what other restaurants in this bracket often ask of their customers. Ordering carefully, you may even manage a 2 course dinner here around £40 per person. Not that we'll be going back - I prefer food without eyelashes and better service no matter what I'm being charged.

I've always had my doubts about Michelin star ratings. It's difficult to find honestly critical reviews of starred restaurants, making it hard to know what to expect going in. My experiences of (now star-less) Nobu and Purnell's were great in a way that just doesn't compare to the Simon Radley - and Barrafina or Castle Terrace aren't even worth mentioning. Given the wildly varying experiences I've had, I will be giving one starred venues a miss in the foreseeable future, unless they come recommended through other sources.

NB. The final score, while influenced by the sub-scores, is a qualitative reflection of my overall impression the establishment.