I wish I meant upper limits in terms of food and experience. I don't. I mean upper limits in terms of patience. Don't get me wrong, my meal at Dishoom in Covent Garden was by no means a negative experience - kudos to the staff who handled an amusing hiccup in our meal very well - but I cannot recommend this place without adding a few words of warning. The first warning is about the queues. One Friday night, the hostess told me a table for two had an hour and fifteen minute wait. I laughed and left. This is a restaurant that does not take reservations for groups smaller than 6 - a seemingly effective marketing tactic that sees queues snaking all along the pavement outside. I've never understood why people put up with this. Plan ahead and book. If for some reason you haven't or couldn't, there are plenty of nice restaurants around that won't make you stand outside as advertisement. If you really do want to try the food, come back during a quieter period. As both friends in real life and bloggers online had recommended this place, this is what I did and dropped by for lunch on a weekday. 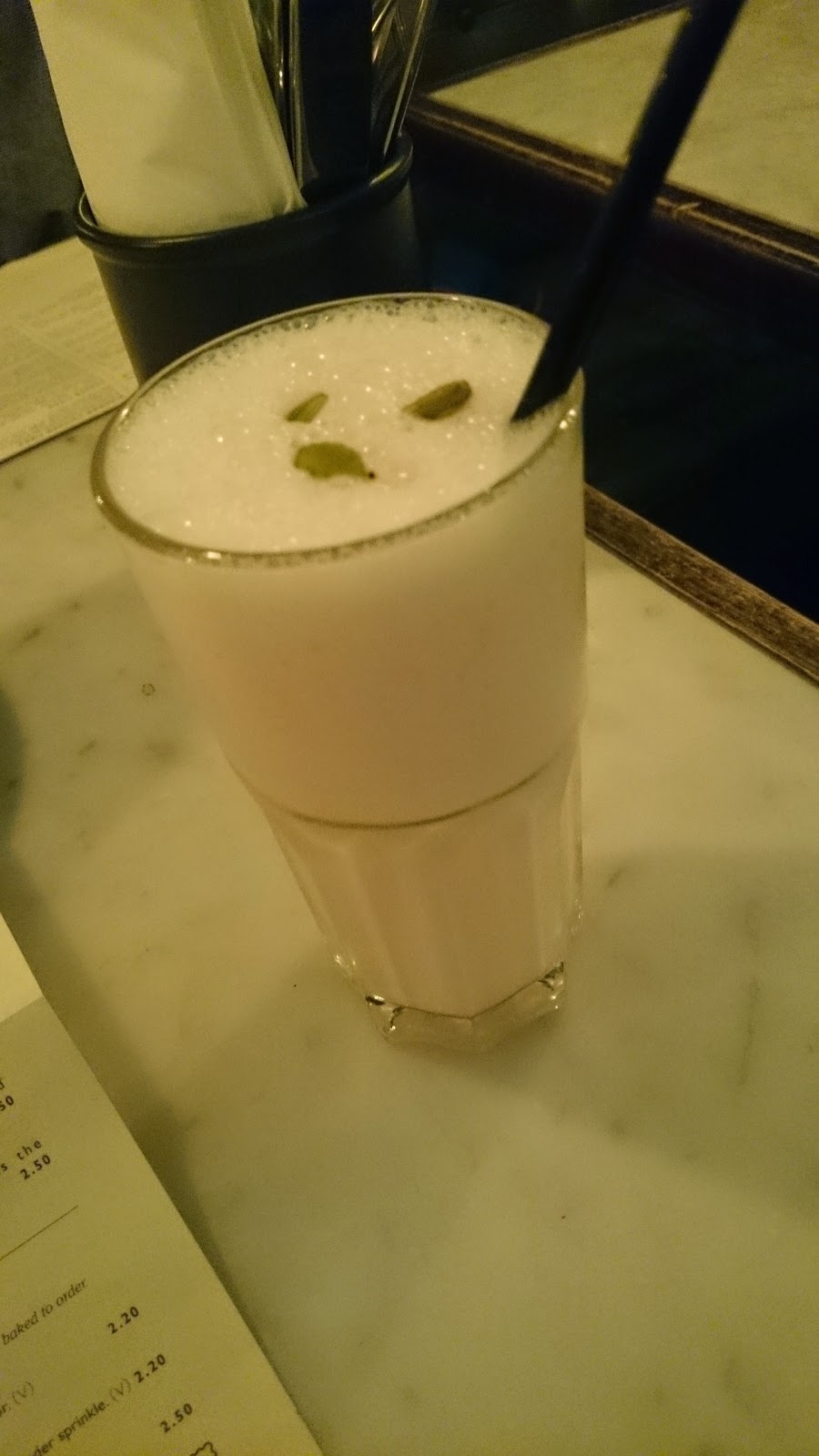 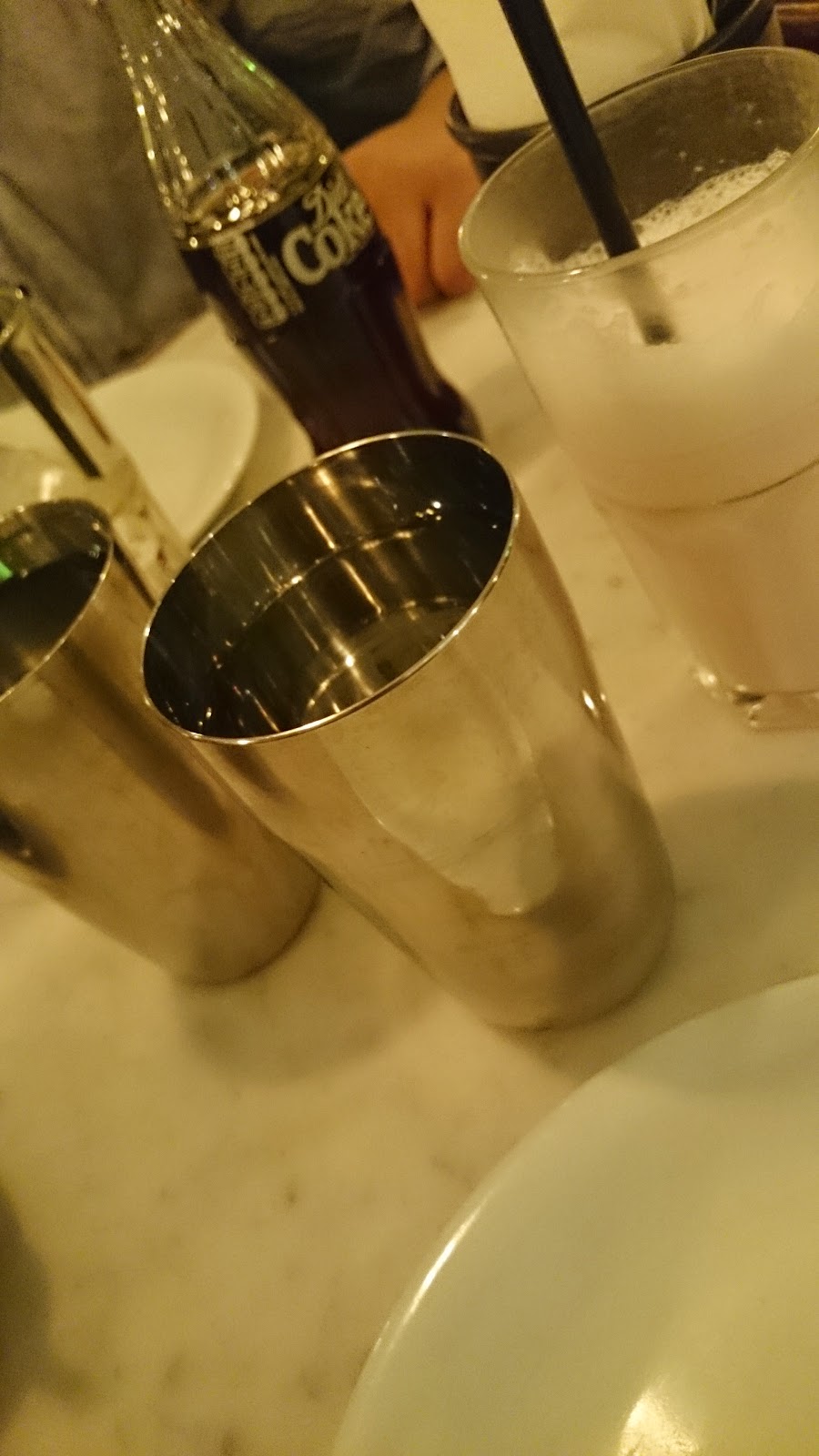 Even then, the place was pretty full and we were shown to a table downstairs. I don't know what an Irani cafe should look like, but Dishoom gave me contemporary London vibes. A friend from Mumbai confirmed this - the interior was the closest imitation he's seen to an Irani cafe but it's not quite there. Initially there seemed to be a lot of pressure to order: we picked out drinks very quickly and were then asked about food orders twice in rapid succession. After turning our wait staff away for the second time things seemed to calm down. My rose lassi arrived, and I'm happy to report that it's the best I've had in England, dethroning Pushkar of Birmingham from the top spot.

We placed orders for food, deciding on two small starters and two mains each since we were quite hungry. This is where I issue the second warning - this time on the price versus the portion size. We paid £4.20 for two small samosas and £4.30 for a bowl of puffed rice. Both felt quite expensive, despite this being Covent Garden, especially since neither dish was particularly special. The pastry on the samosa was nicely done but the lamb filling was dry and lacked flavour. The bhel was missing the tangy/spicy kick - a telltale sign that the food to come was going to be mutilated for the Western palate.

We had been told that our orders would be brought to the table as they were ready, but thankfully all of our mains came at once, shortly after we finished our starters. I'll start with the good news by saying my mains were great. I'd asked for some of my favourites, and just above you see my boti kebab. It was quite possibly my favourite dish of the night - the meat was correctly spiced, flavoursome and had quite a kick to it too. Biting into it I hoped my fears about mutilated flavours were going to be misplaced.


I continued to be reassured as I tried my other main, the mattar paneer. This dish is a curry of Indian cheese cooked with peas, and a favourite from my short stints in Delhi. It was again very good, with the paneer being nice and soft; with both it and the peas immersed in a thick, tangy sauce that brought back old memories.

My only complaint was about my romali roti, which as you can see above was served in what seems like a baking tray. Questionable aesthetics aside, the boxed-in container doesn't let the bread breathe, meaning I ended up with a rather soggy roti.

But that is a very small complaint, especially if I compare my experience to my friend's. Both of his mains were poor. The Dishoom chicken tikka roll you see above was downright awful. The quality of the meat was questionable, as was the flavour which did not seem reminiscent of chicken tikka at all. I wonder why the restaurant gives its name to such a weak dish.

My friend's luck didn't really improve with the lamb chops, which despite being called spicy were nothing of the sort. Perhaps we should have read the menu description more carefully and steered clear - re-reading it revealed this was something marinated overnight in jaggery. I wish Dishoom had been a little bit more careful with the naming as nothing marinated in jaggery overnight will ever be spicy! I've never had lamb chops prepared this way before, and perhaps it is an authentic flavour, but neither of us enjoyed it much.

As our mains were being cleared away we decided to order dessert since we were still a little hungry. Pause and think about that for a second. We had just finished off two mains each, and yet we were still hungry. Dishoom, it seems, is yet another one of those trendy restaurants that are quite ungenerous with their portions. My mattar paneer, excellent though it was, could not be considered much more than a side. My boti kebab was scarcely more than a starter and I can make similar comments about my friend's dishes. This is where the lack of value at Dishoom hit home for me - you pay what seems to be a reasonable price for items, but the portions are very small - something to be aware of if you're balancing budget and food amounts. You can get away with spending less than we did, but I hope you have a small appetite. 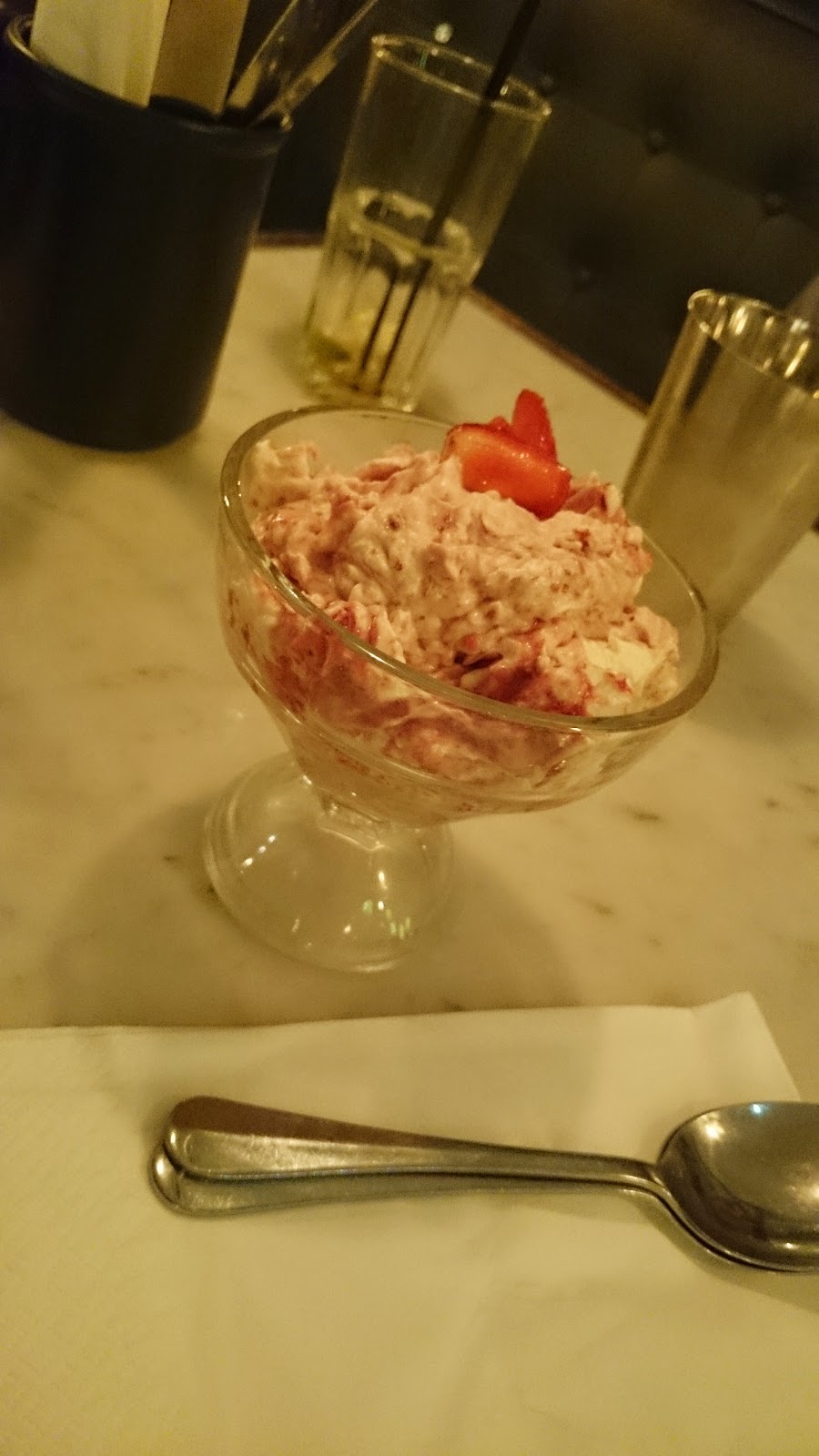 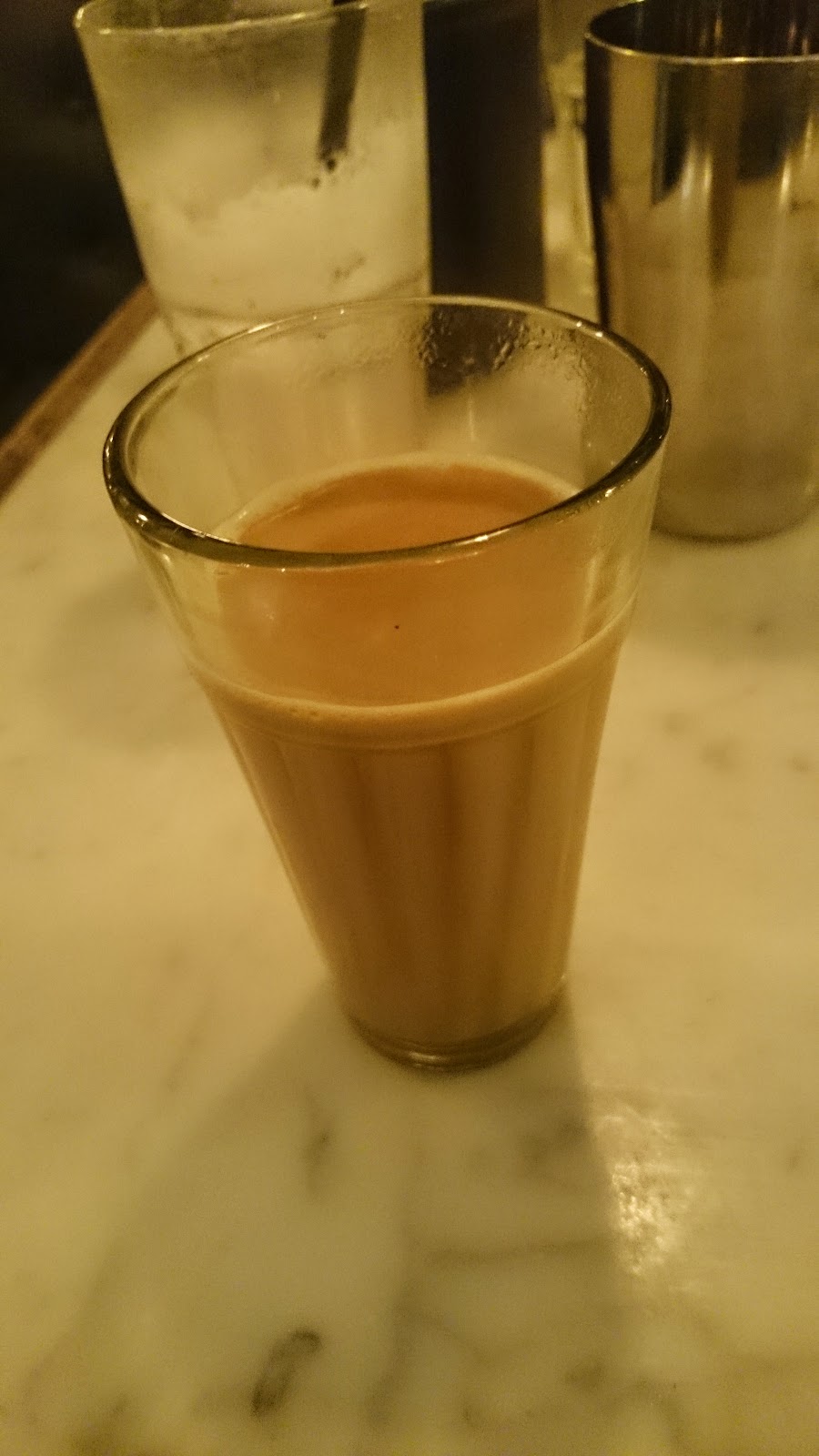 Memsahib's mess on the left and chai on the right.

We briefly thought about going elsewhere for dessert, but the Memsahib's mess on the menu had me curious. According to the description it was a colonial take on the Eton mess: fresh cream, crushed meringue, strawberries, rose syrup and gulkand. If you're a fan of rose like I am this is a great dessert, though our serving was poisoned by a slice of onion hiding in the cream. Fresh cream, rose syrup and onion make a rather horrible combination in case you're wondering. I found the situation amusing more than anything else. A waiter quickly offered a replacement, apologised profusely and took the item off the bill and so I am almost willing to let it go. It's just that the chai we were told was being offered on the house as an apology somehow ended up on the bill. We didn't press the issue - it was one of those occasions where we were out to see each other rather than worry about the food and fight with the waiter. It also gave me a chance to review the chai, which I'm sad to report was quite weak and did not use the best combination of spices.

Our second dessert scoffed and tea drunk, we asked for our bill, which came to £60 between two. This was for two non-alcoholic drinks, two starters, four mains and a dessert. Not as expensive as it could have been considering the four mains and the restaurant location, and I would have called it good value had it not been for the small portions. Service had been nice and friendly throughout, and the episode with the dessert was handled well. With this in mind I am not judging Dishoom as harshly as I may have for the onion. My only conflicted rating in fact is for the food. It ranged from excellent (my mains), middling (the starters) and poor (my friend's mains). Given how much I enjoyed my own food, I'm sticking with the relatively good score below.

It still doesn't salvage Dishoom's overall score, however. The bottom line: don't queue, the experience is too expensively hit and miss to be worth it. Visit instead during off peak hours, if you happen to be in the area.