A Panorama of the Eternal City


It seems I've turned my luck around when it comes to visiting fancy restaurants. The trip to Imago was very carefully planned: we were going to land in Rome around noon, check into our hotel near the museums, walk around the Pantheon for a while before driving to Imago to enjoy dinner and a panoramic view of Rome while the sun set around us (phew!). By the end of the evening, I very much felt it was a mission well accomplished, bar a few minor criticisms about the food itself. I should start out by explaining this wasn't the most usual of my meals. Between my dining companion and I we had quite a few ingredients we wouldn't eat – no pork or alcohol for me and no fish or seafood for him. Thus we ended up opting for the vegetarian tasting menu as the restaurant wouldn't serve two tasting menus on the same table, although I have had this service elsewhere. Thankfully, the other party seemed quite keen on the vegetarian menu so I was happy to relinquish. Imago also offers an a la carte menu, and if I was a smarter person I probably would have opted to give this a glance as well.


We were asked about and brought water and an amuse bouche quite quickly, which was a nice change from the relaxed service I've suffered in some places. In the photo above you see battered quails' eggs, zucchini fritters and cod roe cigars. The zucchini was the standout piece – hot, crunchy and the vegetables melted in your mouth as you chewed.


The restaurant itself is located on the top floor of the opulent and old fashioned Hassler Hotel, but the décor in the dining room diverges from the rest of the hotel. Imagine yourself in a room filled with natural light from numerous elongated windows along the walls offering you panoramic views. To this add dark wooden tones for the bar and furniture, with cushions, tableware and other miscellanea tending to a deep red. More of the interior becomes apparent from the rest of the pictures in this review, but you'll be best served by Google here as I forgot to take a picture of the interior.


As we finished off the amuse bouche, our waiter brought over the bread basket. I'm not sure why there was a smear of tomato puree on the side, but the breads themselves were quite good and rivalled the Simon Radley, which I now use as my benchmark for bread in all my reviews! In the picture you see a cheese dip, hazelnut breadsticks, pizza bread, olive bread, some wholemeal and plain buns and cumin croissants. Everything was good, bar the croissants which were just strange.


I'd asked for a non-alcoholic pineapple mojito with the water, which was not on the menu but the restaurant was quite happy to accommodate. We settled down and took in the view, and I took the chance to take a few more pictures, especially as were being treated to a rainbow courtesy of the thunderstorms from a few hours ago.

My pineapple mojito arrived, and I have to say that it was quite small compared to what I've had at other establishments on par with or better than Imago. It was nice, although there are very few ways in which you can go wrong with a non-alcoholic drink.

Finally, we were served our first course - a pea soup with cherry tomatoes, charcoaled aubergine, slivers of radish and mozzarella mouse. I don't recall if the waiter described the crinkly green topping, but it was crunchy and added a sting to the soup. The body of soup, however, was completely devoid of seasoning. I may have missed something here, and perhaps the chef intended for us to mix the mozzarella into the dish to counter this. Sadly, I did not enjoy this course much, although my uber-low salt intake companion was quite pleased.


The course that followed was probably the most beautifully laid out of the evening. In the photo above you have seaweed, foamed and normal mozzarella along with some other vegetables resting on top of a tomato fluid. The fluid itself was great – reminiscent of a cold tomato soup but seasoned unlike the last course! I personally love seaweed, although there were many different flavours going here and I preferred some over the others. All in all, it added a nice twist to a dish which otherwise risked becoming a plain tomato and mozzarella combination.

Next up was, in my opinion, the highlight of the main courses: pasta from Sardinia filled with ragouzano cheese from Sicily, accompanied by tomato cream and grilled artichoke. None of the flavours here were particularly novel, but the dish was simply delicious and proof of the skill in the kitchen. Probably my favourite of the night! Just a small footnote on the artichokes, which were lovely but hadn't been relieved of their more fibrous parts before grilling, and made for some unpleasant chewing.

Matching the standard set by the pasta on the next course was always going to be difficult. Unsurprisingly, the spaghetti al dente, tomato puree, cherry tomatoes with gold leaf and hot liquid parmesan didn't quite manage. It was a nice but not particularly memorable course, though I would still compare it favourably to iterations I've had elsewhere.


As we finished off our spaghetti the light started fading and the sky went pink. We waited for a good while, watching the sky and wondering why it was taking so long for our final main course to appear. Eventually, a waiter brought over what was to be the biggest failure of the night: breaded courgette medallions layered with tomato and goats cheese, served with a Mandarin Chinese compote and potato flake.

It sounds like an easy combination, but the courgette was undercooked and hard, and the amount of cheese and tomato was lacking. I'm not sure if any of this was deliberate – I can appreciate the chef not wanting to drown us in cheese and tomato as many other establishments do, but I do not see what leaving the courgette uncooked achieves. Maybe it's just a Rome thing, as I was treated to a much better iteration of this at a small restaurant in Napoli a few days later. The accompanying compote was fine, and the potato flake negligible. I also wonder if the delay was indicative of a dish gone wrong, with the medallions prepared hastily to make up for lost time.

I'm sorry I'm talking about the sky so much, but as the last of the light faded the restaurant took on a psychedelic ambiance. Again, I regret not taking a picture of the interior, but can I give you (another!) a snap of the window. While it's no substitute for the real thing it does give you an indication of what it's like inside.


It was around this time that the waiter brought us our pre-desserts: a frozen fruit and caramel crumble with what I believe was cold cream poured on top, and a strawberry marshmallow on the side. The marshmallow was nice, but the crumble itself was like a slice of heaven. In my mind this competed with the pasta as the best course of the night, and went a long way to compensate for the courgette medallions of the previous course.

Finally, we were treated to dessert itself: a passionfruit bar served with ice cream and chai dust. Thankfully, this was a good follow up to the pre-dessert and one of the better dishes of the night. A fine finish to the main meal, especially as I wished for more of it when I was done. 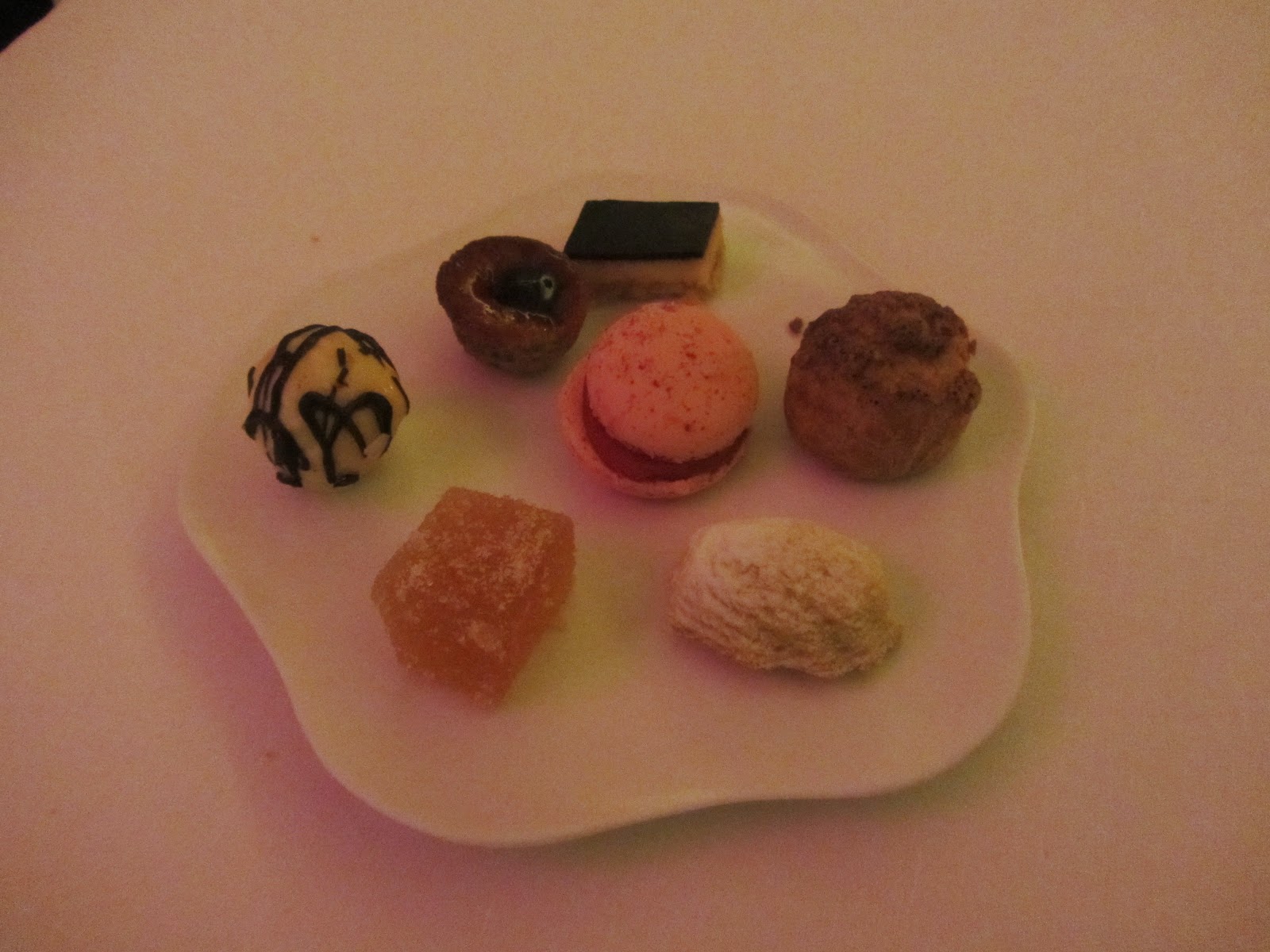 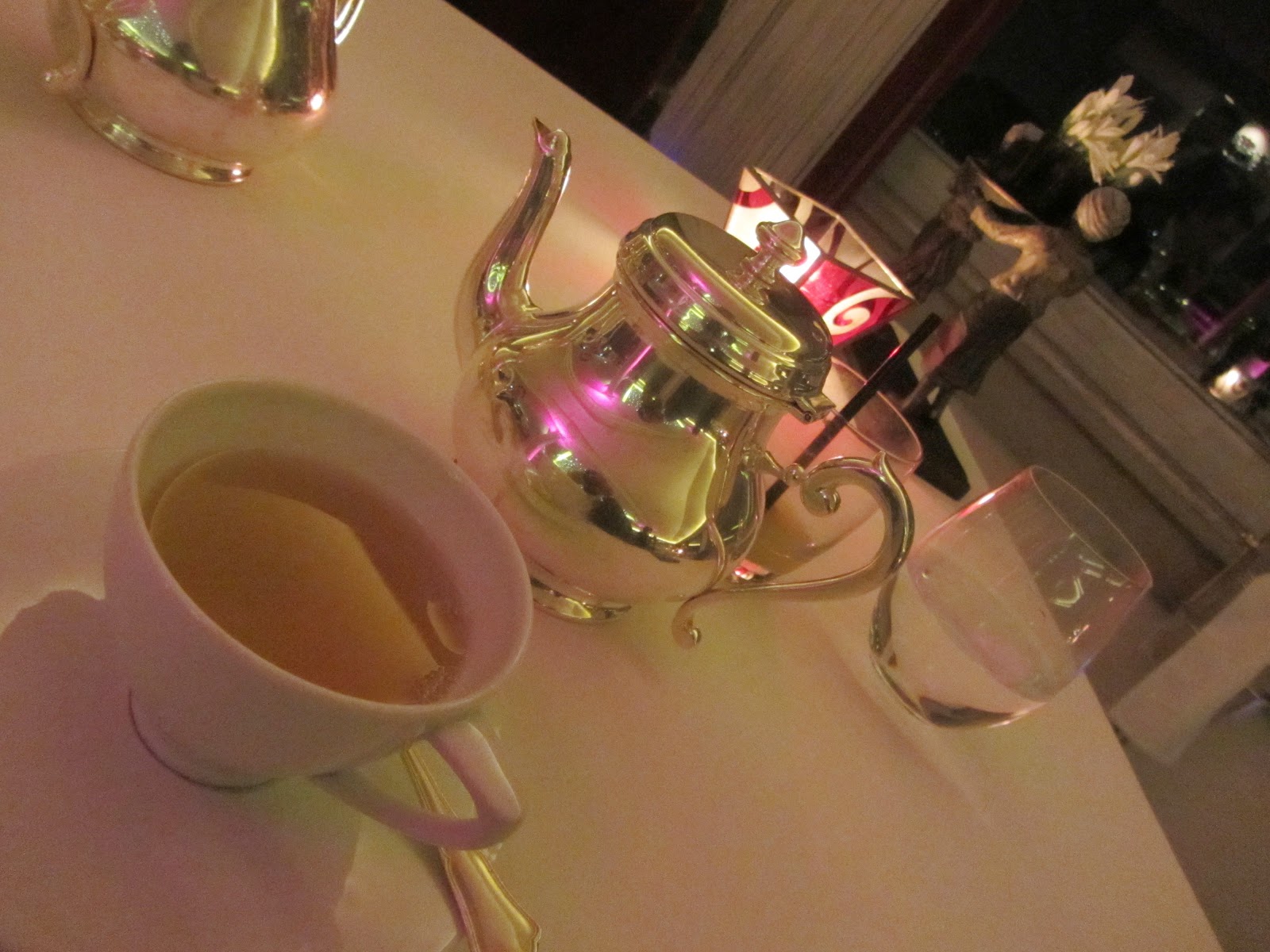 On the left, macaroons and chocolates. On the right, tea and coffee.

We wrapped up the meal with tea and coffee, and were also offered the plate of goodies on the left. I am happy to report the macaroon was perfect, but nothing else really stood out. The coffee, as my coffee-snobby other half reports, was nothing special. The Darjeeling tea was nice, and probably hit the ceiling with respect to what you can expect in Europe. By the end of the meal we were handed a bill for EUR 278 for our two vegetarian tasting menus, a large bottle of water, one mocktail, tea, coffee and a cover charge. The tasting menu was 110 EUR per person, meaning a charge of 29 EUR for the rest. Not exactly a value proposition, but not the worst I've seen (and thus avoided). Service was alright – the waiters were polite and helpful, taking time to listen to us and describe each course as it was brought to the table. However, they'd deigned it necessary to move our water away from the table and inevitably started missing refills towards the end of the meal as the restaurant filled up. That coupled with the long delay before the courgette medallions meant caused a noticeable blip on the radar.


Going into the meal, I'd wondered if I would regret opting for vegetarian. Looking back now, I can honestly say that I don't regret the choice. Imago would be a venue I'd recommend for a special meal in Rome, not just for the food but also for its great the view and its location near the Spanish Steps. The meal had some memorable highlights, including the Sardinian pasta filled with ragouzano and the dessert courses. However, there were too many duds in between to warrant excellence, and this is reflected in the score below.