I've been to Lasan twice now, once in late 2012 and again now in late 2013. It came highly recommended by word of mouth. They'd won a prize on some food show by Gordon Ramsay, and apparently their approach to Indian food was incomparable to the run-of-the-mill curry house. The skeptic in me was convinced by none of this, but I decided a restaurant with so many accolades was still worth visiting. Don't be mislead by their website - the Ramsay hysteria has died down and bookings no longer need to be made very far in advance, unless you're looking for a weekend evening.


My first time in Lasan was actually for a weekend lunch with a cousin and no booking was necessary. Upon entering the deserted restaurant we were shown to a table near the middle of the room. It felt strange to be eating alone in such a large space, but thankfully a few other tables filled up over the course of our meal. The street entrance to Lasan is pretty inconspicuous, but the reception and bar immediately inside are quite ornate. This again is in contrast to the simple wooden tables and chairs laid out over two levels in the dining space to the left. The restaurant has large windows and feels light and airy during the day, but the ambience is toned down with soft lighting in the evenings. 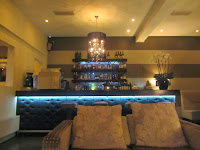 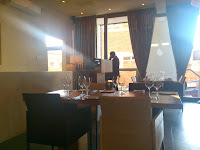 On the left, the bar at the entrance and on the right, part of the interior.

Service has always been excellent, with no hiccups worth mentioning. On both occasions, ours waiter took orders for our drinks a few minutes after seating us, and then left us to peruse the menu for a while before returning for the food orders. The staff have always been happy to help with ordering and describing the dishes on the menu. This menu, I imagine, changes with time. The sample menu on the Lasan website at the time of writing is what I had in 2012, but the menu in the restaurant on my subsequent visit in late 2013 was a little different. 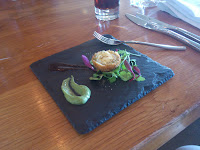 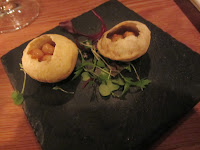 Amuse bouch. Scotch egg on the left, and fuchka (or pani puri) on the right.

Food at Lasan can take a while to arrive, so either ask what's quick or leave yourself plenty of time for the meal. Starters are preceded by a little amuse bouche from the chef, which has so far has been either half a scotch egg or fuchka, a chickpea concotion served with tamarind sauce in a wheat based shell. A nice but not-really-necessary touch: the items have never been particularly memorable (and I'm a big fucka fan!). 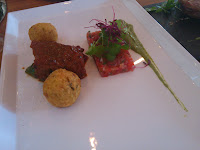 On the left, mans ke shooley and on the right, Afghani lamb.

Thankfully, the actual starters themselves have been consistently impressive, and I would even say they upstaged our mains during my first visit. My cousin started with the mans ke shooley, which is a clove smoked, dry aged oyster of beef marinated with hung yoghurt and mustard oil. A very good dish - the cutlet was left moist and palatable, unlike the dry hunks of Tandoori meat customers are served in many other restaurants.  I opted for the Afghani lamb, which is a Tandoori roasted lamb cutlet accompanied by a shin and lentil pattie. On my second visit I had a similar lamb cutlet, although the dish had been renamed. Perhaps there had been a small alteration to the ingredients which justified this, but it still felt gimmicky to me. Unfortunately I don't recall the new name and I've since both set fire to and lost my receipt (don't ask). It is, however, the first item on the list of starters, begins with an 'n' and I highly recommend trying it. The meat on both occasions was cooked to perfection, with the flesh soft and juicy, not overly done but still thoroughly infused with flavour. The pattie (or kebab in my opinion) on the side has also always been very good, reminding me of a properly traditional Bangladeshi beef kebab. It could probably hold it's own as a starter, and in a lesser establishment it probably would.


The problem with amazing starters is that they set high expectations, expectations that Lasan has not always been able to match with the rest of the meal. On my first visit I had the dum ki biryani, which at Lasan is goat biryani. Biryani, for those who are unfamiliar with the term, is a dish of rice and curried meat cooked together with various spices in a pot sealed with dough. Ingredients vary from region to region, and the dish has travelled all the way to Malaysia from the Middle East, stopping to establish itself in various countries along the way. Lasan's iteration is served at the table still sealed, where the dough has cooked through due to the heat of the dish beneath. I don't know if they actually cook it in these one-portion pots, but cut through the (now) bread and you'll find spiced rice and generous portions of meat. It had the instantly recognisable flavour of authentic biryani, something I have missed since moving away from Bangladesh and out of my parents' house.

Sadly, this high wasn't maintained with all of the dishes. Our other main was the macher jhol, as recommended by Gordon Ramsay. Macher jhol means fish broth in Bengali, but our waiter specifically warned us not to expect a completely Bangladeshi dish. The broth was Bengali, yes, but it was served with a pan fried fillet of bream, potatoes and spinach. The warning was appreciated, but I definitely appreciate fusion and experimentation, and I actually wanted to experience the result here. I'll start with the good news - the broth was truly authentic and I have to commend Lasan for bringing this taste to the restaurant scene. However, by virtue of its authenticity the broth was also completely unremarkable. It also could not have been cooked as it was without actual fish, and I wonder what happens to this once the broth is made. I hope they don't just throw the fish away. We definitely saw none of it as it was replaced by bream at our table, which made for an uninspiring combination with the broth. My personal opinion is that there are other styles of Bangladeshi fish broth that would have worked better with the bream, and I would urge people not to trust Ramsay's opinion of South Asian cuisine. 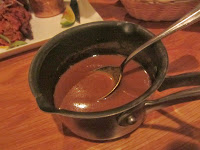 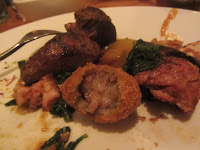 Bone marrow broth on the left, and the bone marrow scotch egg on the right.

On my second visit I had an excellent dish called beef elaichi. Literally, this means cardamom beef. But on the plate I got beef cooked pink and accompanied by spinach, grilled cow brain and a bone marrow scotch egg - all served with a side of bone marrow broth. I'm glad Lasan is pushing boundaries in terms of bringing the more unique South Asian ingredients to its tables. I was particularly impressed at how they had done the brain, ridding it of its smell - something which many restaurants fail to achieve. I'd actually wondered if it was paneer for a few mouthfuls. The bone marrow scotch egg and broth, however, did not add much to the dish and were showmanship above all else.


The second main on this trip once again failed to impress. I wonder I should take this pattern should just be a rule of thumb for Lasan. My friend had a lamb shank dish from the new menu. I must apologise for not remembering the name, especially since I am warning you not to try it. The dish is simple enough - spiced minced lamb served with hung yoghurt. It had an impressive kick, but the balance of flavours was completely off. It seemed like a poor imitation of the Bangladeshi sheek kebab served in stalwart Dhaka establishments like Star Kebab or Hirajheel. I like that Lasan is trying to bring that particular style of kebab to Britain, but in its current form the dish is not yet ready to be served to guests. 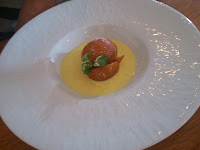 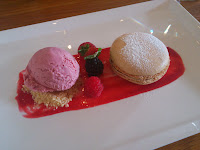 On the left, gulab jamun with cardamom scented custard. On the right, cinnamon spiced apple macaroon with raspberry ice cream.

Dessert has been a mixed affair on both trips. I've had the gulab jamun served with cardamom scented custard twice. The first time, it was a good, solid dessert. Nothing to write home about, but a satisfying end to the meal. The second time, however, the gulab jamun gave off a whiff of prolonged refrigeration. I've also had the spiced apple macaroon served with raspberry ice cream, which I cannot recommend to a fan of real macaroons.

I do wish I could give Lasan a better score. They're kitchen is serving up interesting, authentic and uncommon flavours. But equally, there is a degree of inconsistency to the dishes that do make it to the table. An excellent dish like the beef elaichi, a rare new experience in South Asian cuisine for myself, tends to be accompanied by failures like my friend's minced lamb. I hope the restaurant will mature, however, and will probably drop by again in the future to see how it has changed.