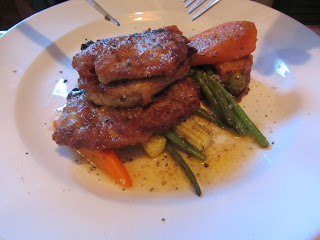 I've been fortunate enough to have travelled quite a bit for work since I started this new job. I've found myself in many different cities in the UK and beyond, living in hotels and looking for nice restaurants to eat at. Unfortunately, I've mostly looked in vain, and restaurants that have made a lasting impression are few and far in between. Rustico, however, is an exception. This fantastic Italian in Aberdeen is one of the best I have ever been to, although I will admit to not being an expert on this particular cuisine. 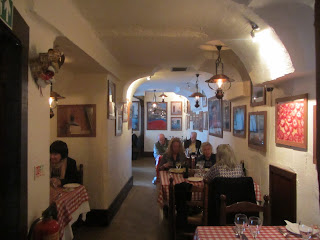 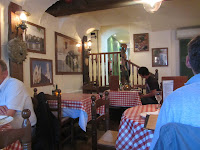 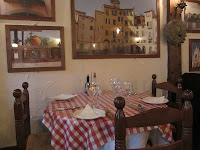 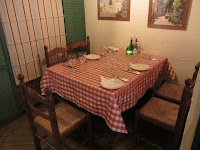 The interior feels small, cosy and perhaps even a little haphazard but it must be able to seat close to a hundred.

I tend to find myself in Aberdeen a couple of times a year, and a few colleagues took me to dinner here on my first trip. I was too shy to photograph everything in front of everyone on the first trip, but I've gotten over that by now. Rustico is apparently family run, housed inside a granite building that I'm sure was actually intended to be a house. The restaurant sprawls over several floors, its tables covered in red and white checked tablecloth while pictures of Italy hang on the whitewashed walls. All of this is laid out at different levels and in different rooms. The ceiling is sometimes low, sometimes high and sometimes you see exposed wooden beams and the odd chandelier. The result is an effect of haphazardly small-and-cozy, but I'm sure this place can seat around a hundred.


The staff I've always found to be friendly and enthusiastic, and our waiter upon arrival was no different. Rustico can get very busy, but we were early on a weekday night and so he quickly took us to a table somewhere on the first floor. He was then replaced by our waitress, who brought us a blackboard with the day's specials and took orders for our drinks. As she came back with them, another waitress appeared with bread sticks, dips, and a bread basket. One thing about Rustico - they always seem to have an abundance of waiting staff around.


Service was easy-going and friendly (by both waitresses), and we were not rushed to place our orders. Our first waitress actually spent a considerable amount of time with us recommending dishes. Unfortunately the calamari and the day's fish, both of which we had wanted to order, had run out. I get the impression that this is a regular occurrence at Rustico, as on my previous trip a couple of items on the menu had been unavailable as well. The menu itself is quite extensive however, so there should be plenty of alternatives choose from - as long as you weren't looking to order pizza. 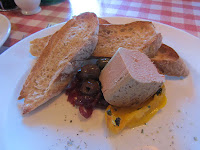 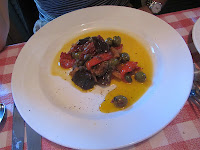 On the left, house pâté. On the right, peperonota or sautéed aubergines, peppers, sun dried tomatoes, olives and capers.

We placed our orders and our starters arrived quite soon after. I went for the house pâté served with crostini bread, pickled onions, yellow pepper and olives. The pâté itself was made from duck liver, but I couldn't really distinguish it from chicken in terms of taste. I also didn't feel that the olives worked well with the dish, but perhaps it's an Italian thing. My colleague went for a vegetarian starter, the 'peperonata', a plate of sautéed aubergines, peppers, sun dried tomatoes, olives and capers. It may sound simple or even bland, but in fact the opposite was true - the peperonata was bursting with flavour - clearly the better choice over my pâté. I seldom find myself praising a vegetarian dish but this is definitely something I recommend trying. 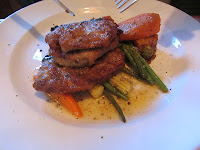 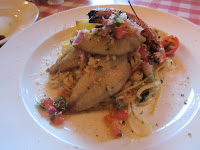 On the left, pan fried thin slices of veal fillet with parma ham and sage flamed with brandy,
served with potatoes and vegetables. On the right, pan fried mullet with prawn, mixed olives and anchovy salsa - this was a daily special.

Having opted for meat in my starter, I decided on fish for my main. I had one of the daily specials - pan fried mullet with prawn, mixed olives and anchovy salsa. The dish turned out to be surprisingly heavy, but not at all in a bad way. The portions of mullet were generous, which is disappointingly uncommon in restaurants of this bracket. The anchovy didn't overpower the other flavours, which were light enough to keep me eating despite how hearty the meal was. My colleague, on the other hand, returned to meat by ordering the pan fried veal fillet with parma ham and sage flamed with brandy. Again, the portions of meat were generous, and cooked medium just as he'd asked for. The only thing I will say here is that the mains took quite a while to arrive, possibly longer than even 30 minutes. This, as far as I can tell from my previous visit, is pretty standard for Rustico when the venue is busy. If you're in a rush, it's probably best to ask about what's quicker. 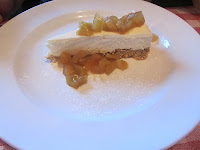 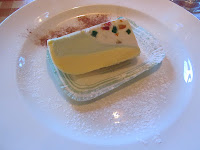 On the right, vanilla cheesecake with caramelised apple. On the right, Sicilian ice cream with candied fruit and chocolate.

We decided to finish the meal off with dessert, a rare occurrence at work dinners. I went for the Sicilian ice cream with candied fruit and chocolate. It was a little too greasy for my liking and not something I'd order again. The flavour, which the waitress told me was pistachio, was fine. Again, my colleague made the better (and safer) choice with the set vanilla cheesecake and caramelised apple. I liked how the cheesecake was not overly sweet, and how this complimented the apple very well. Probably the dessert I'll go for if I'm in again!


In the end, our bill came to around £35 per person excluding alcohol. Not too pricey for a restaurant of this calibre, especially as I have paid more at lesser establishments. I can't however say that it's cheap, and it's probably not the kind of place I could drop by everyday. Having said that, I can easily see myself coming here again or bringing someone here to impress them. I don't say that about a restaurant very often, and it should explain the pretty high score below.