I tried to have my house warming (finally!) yesterday night, but the snow conspired against me and we ended up with half the number of people we were expecting. I had still cooked though, so I thought I may was well post recipes for some of the evening's menu. My first post is the traditional Bangladeshi beef kabab, which is hugely versatile because it can be served as a main, side or snack depending on how it's sized and accompanied. I'm afraid I have no photos of the finished kababs to put up, people were already over and I forgot to take any in the mad rush of getting the food ready.

Update (03/06/2016):
I've re-written the instructions below to include some new ingredients, notably the traditional mint that I mention in the Additional Info section. I've also included notes on how to cook this in the oven, and avoid the laborious pan frying. A word of warning though - oven cooking gives this a bouncy kofta-like texture, as opposed to the cakey, meaty mouthfeel of a traditional kabab. 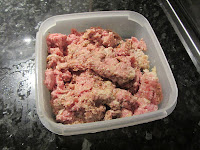 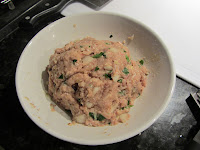