Okay, I realise it's not Ramadan but I did a part 1 to this a while ago and promised a part 2, so here goes. 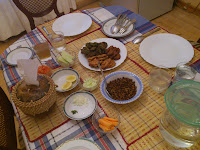 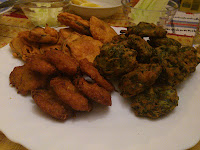 Our table, with a close up of all the unhealthy but very traditional fried foods!

On my way to Bangladesh I stopped over in Madrid for a day, meaning I spent a day fasting and having iftaar there. Wherever our family may be in the world, our iftaars are still pretty traditional. So while there are tomatoes, cucumbers etc. on the table, we also do the more traditional fried foods. Looking to the picture on the right above, at the front left we have dal bora. Dal boras are usually served as snacks, and are made from lentils mixed with chilli and onion. This mixture is then covered in maize flour and deep fried. The shaag bora on the front right is similar except the lentils are replaced with spinach. Finally, in the background you have begunis, where the spinach or lentil is replaced with sliced eggplant. While it wouldn't be unusual to have these foods throughout the year, their popularity peaks in Bangladesh during Ramadan.

Emirates do iftaar! This I found out on my flight to Dhaka. Okay, a version of iftaar - you're given some dates and a bottle of water before you're served the usual meal you skipped. But the dates are really nice. 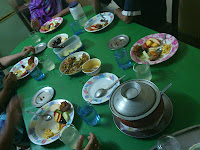 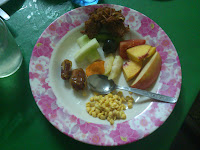 Our iftaar table at my granma's in Dhaka, with an emphasis on healthy eating :P 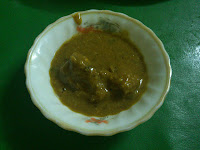 Haleem, which I mentioned in part 1

Iftaars in Dhaka are my favourite because that's where you get all the kebabs, as you can see from the photo directly above. But those you get all year, and I'll talk about them more in some of my reviews. The top two photos depict our usual iftaar table - notice the emphasis on fresh fruit and raw chickpeas. Raw chickpeas are eaten in addition to the cooked variety, and are served with lemon juice, minced ginger and a dash of salt. Finally, in the middle you have haleem, which I mentioned in part 1. 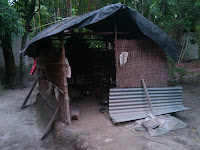 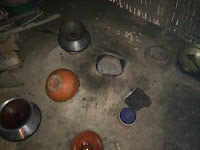 The kitchen on the left, with a pit dug into the earth for cooking on the right 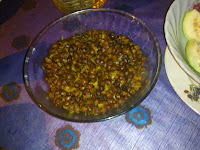 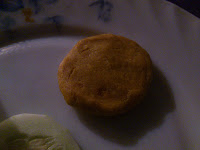 Cooked chickpeas on the left, and some kind of amazing savoury cake on the right

Rural Bangladesh is where iftaar gets the most interesting for me, meaning I get to find out about the most obscure traditional foods. The two photos on the show you the kitchen and its interior. The kitchen is just four bamboo walls with a hay roof, covered with a tarp to stop the rain. The floor is bare earth, with a pit dug in for cooking. The savoury cake I mention in one of the photos I'll definitely have to find out more about. And I've described all the foods in the captions, except for ghol...because unfortunately I've forgotten exactly what it is! My mom and grandma explained what it was, but all I can remember now is that it's made from milk, but isn't exactly yoghurt.


And that's all folks. I've actually started working, and I'm wondering how I'll make time to deal with my huge backlog of posts and recipes! However, I have just bought myself a new tablet and maybe I'll do some blogging on the go. I did most of the writing for this post in a really reaaally cramped train on my way back from work, so this new toy's not bad right?
Posted by AC